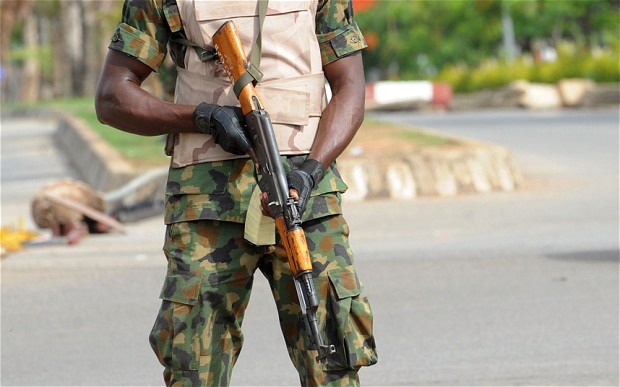 During a live program on Nigeria Info fm that was anchored by Sandra, an ex soldier of the Nigerian Army who recently retired called in to share his experience when he was serving the country.

The following is the excerpts from the conversation..

I'm an ex-soldier, the Ex-soldier of the Nigerian Army. I was in bourdillon, we were fighting the Boko Haram.

We went to war, I'm a left handed person. So, I'm a sniper. I'm the one of the best sniper, I was shooting, no morale, no pay, no means of communication to my family. My father thought I was dead. I was fighting, I was shooting. One of our soldiers shot me on my ribs. And they spoke to themselves in hausa that I kill people (Boko Haram) too much.

I was barely breathing, it took the grace of God for me to survive.

The presenter asked, they shot you on purpose ?

They shot me on purpose, "they say I too dey kill people", he said they said that in Hausa language.

It means I kill Boko Haram too much, and because I'm the best sniper, I don't miss my shots.

I'm left-handed, I don't miss my shot, he repeated. No morale, no pay, sometimes. It's just fight, fight.

They need to investigate them, he added.

Did you retire ? the presenter asked him

It is really pathetic in that Army, there is a lot of fraud, things happening in that Army that people don't know. They need to investigate the Nigerian Army.

When people are fighting, killing Boko Haram and somebody from nowhere will just shoot and kill the best shooter there (in the Army), just for him to die maybe they're gaining from there economically. For him to stop shooting people.

The presenter said "That is a very strong allegation", he said it's true they shot two of his friends dead. He sent he was going to send the evidences to the presenter on twitter.

He continued, "They'll shoot you, you'll go. These people gain". I'm an ex soldier, I'll send you evidence about what is happening there.

This is Sandra, the presenter

Nigerians have been reacting to this video on twitter.

This is not news na it’s been happening, I know of an ex soldier too that escaped after his fellow soldiers killed some of his friends If you know any truthful soldier that has fought boko haram in the north tell them to relate their experience you will weep for Nigeria

Very heartbreaking, i'm at a loss on what motivates those still fighting. You can't beat a system designed to ensure you don't succeed. The guy took the right decision jari.

See the only thing that will stop Boko Haram is if the soldiers from the north especially northeast can be redeploy from every part of the country back to the northeast and those the south are sent back to the barracks. Then let's see if the end of Boko Haram won't come in a week

I remember coming across a very prominent soldier who was at the forefront of the boko haram fight on December 14, 2014. This guy told me that the higher ranks of the Nigerian army works with boko haram and that he’ll be leaving Nigeria secretly to another country.

He didn’t want to get arrested for leaving the army so he had to secretly leave the country. I’ve never heard from him again since that day. Lord knows where he is today.

Seems everyone has forgotten that the captured ones gets released after their fake repentance!!! So what would make anyone believe the fight against boko haram is real? Let’s not forget this quote “ Fight against BOKO HARAM is a fight against the North”

Where re the defenders of Corruption elites, thank God this interview is not from jackson Ude so they won't not come here to run their mouth like tap water. I knew long ago that this so called fight agst Boko'hm has turned to a lucrative business ventures for Nig army hierarchy.