What Solskjaer Did To Van De Beek Against Villarreal Shows The Manager Does Not Want Him.

Van De Beek was told to warm up and get ready to play during the Villarreal game in the Champions League, he was sent back to the bench. He got angry and removed his training vest. The manager decided to put in Fred. It looks so odd to me that a player like Van De Beek sits on the bench all the time. 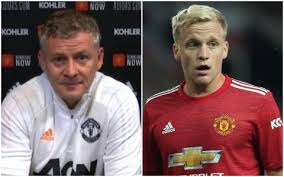 Solskjaer does not want him at Manchester United because the position he plays is already being occupied by two great players and he cannot also play the defensive midfield position. The reason why Ole blocked his loan move to Everton was that he needed squad depth. Van Beek is a kind of player that does not hold the ball for too long and delivers very fast. His style of play does not fit the manager's style and he is likely to move in January.

Solskjaer demanded for Grealish and the board got him Van De Beek. His lack of involvement in Manchester United games has reduced his chances of representing the Netherlands. It does not look as though he will get his opportunities. He had only started 4 games since his arrival from Ajax. Solskjaer still prefers Fred, McTominay, Pogba, Bruno, and Matic in the midfield. He might get his form back if he goes to another club.