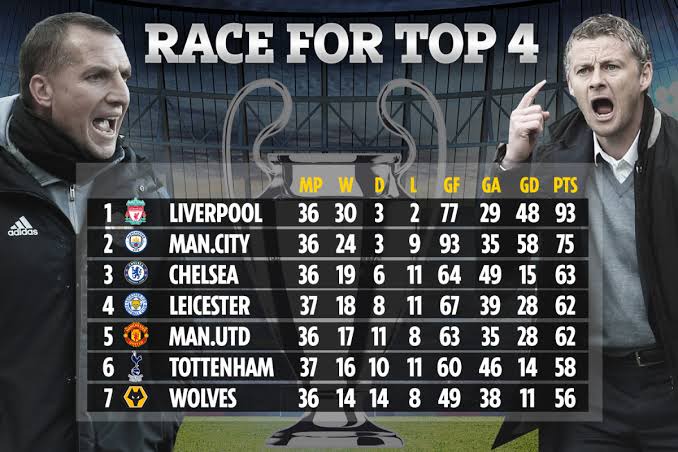 The race for champions league qualification well go down to the wire, with three premier league teams still dreaming of joining Liverpool and Manchester City in Europe.

Man City have officially joined champions Liverpool as confirmed participants in next seasons competition after they are 2 year bond from UEFA competitions was overturned on Monday.

So, who will join the top two?

The blues I've been brilliantly inconsistent since the start, but lampard rectified does defensive issues in a tight 1-0 win over Norwich. With Leicester losing, Chelsea are on the verge of qualifying for Europe but, this still have to surpass two huge tests. First an away to Liverpool and at home against wolves in the remaining two games. The foxes had been shellshock after a 3-0 defeat away to Tottenham leaves them needing results elsewhere to go their way. With their next fixture home to Manchester United the foxes would need to pick up a win to qualify for Europe and need Chelsea To lose to Liverpool away. With the red devil's being the most form side since the restart, and now hold their faith in their own hands. With a 2-0 win over Crystal palace away Manchester United are on the brink of European glory. It's their next match against West Ham at home Manchester United could lose at Leicester and technically she qualify for European football if they win West Ham at home providing their goal difference is superior to Leciester's.

Content created and supplied by: Onyinye17 (via Opera News )