By Garbxtpen (self media writer) | 15 days ago

If There Is War In Nigeria, I'll Stay To Fight -Peter Obi 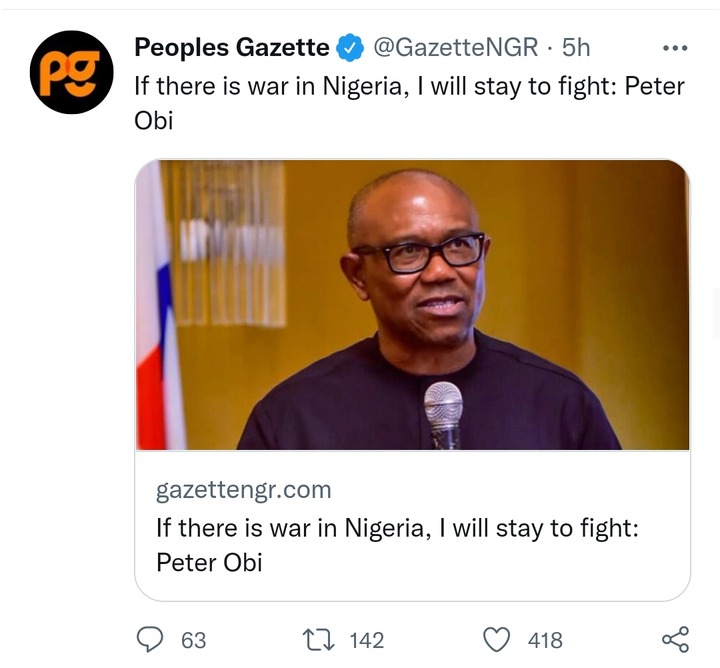 Labour Party’s presidential candidate Peter Obi says he loves Nigeria and he prefers dying in a war in Nigeria than staying alive in another country.

The presidential hopeful in the 2023 elections says he loves Nigeria “irrevocably, and I believe no matter how far we travel or how successful we become outside Nigeria, we can never have another country to call our own but Nigeria.”

He said he has continued to do whatever he can within his personal and group capabilities to “support Nigeria’s march to greatness.”

The former Anambra State governor said this in a virtual meeting with members of his support group, the Peter Obi Support Network on Monday.

A perceived frugal manager, Mr Obi has garnered major acceptance among young Nigerians who see him as a better alternative to other candidates contesting for Nigeria’s top job. 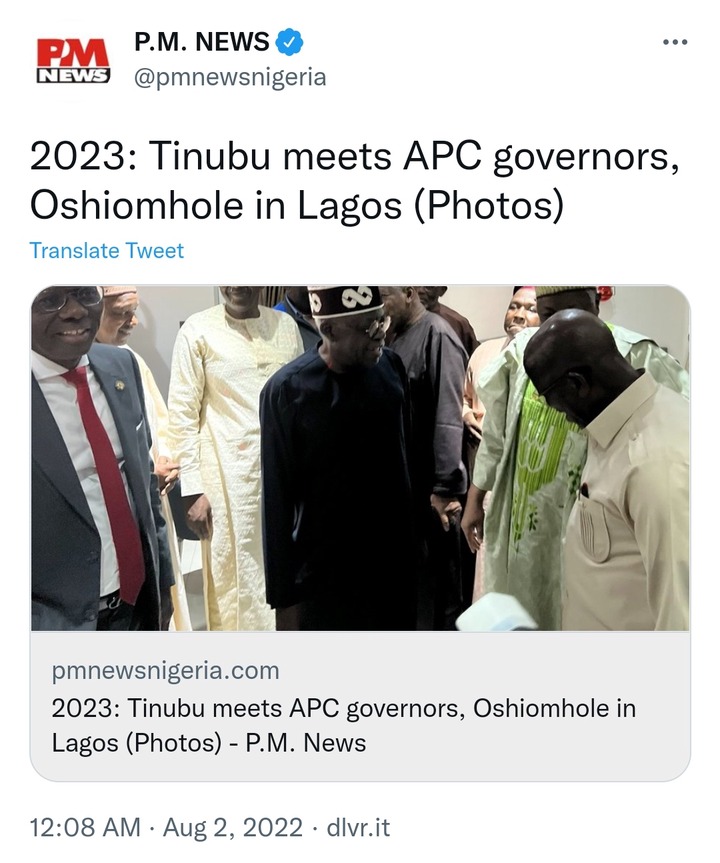 The All Progressives Congress (APC) Presidential candidate, Asiwaju Bola Tinubu on Monday met with six governors of the party in Lagos as part of preparation for next year’s presidential election.

The meet held at the Bourdillon residence of Tinubu also has in attendance his running mate, Senator Kashim Shettima.

Details of the meeting were not known but it might not be unconnected with finetuning plans by the APC to win next year’s presidency. 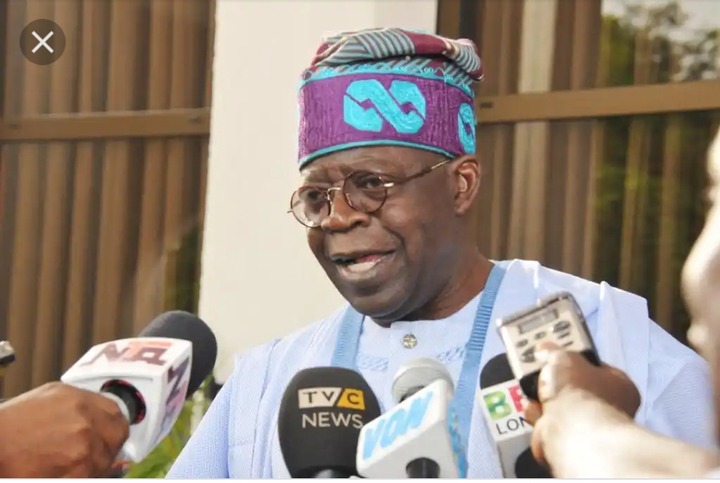 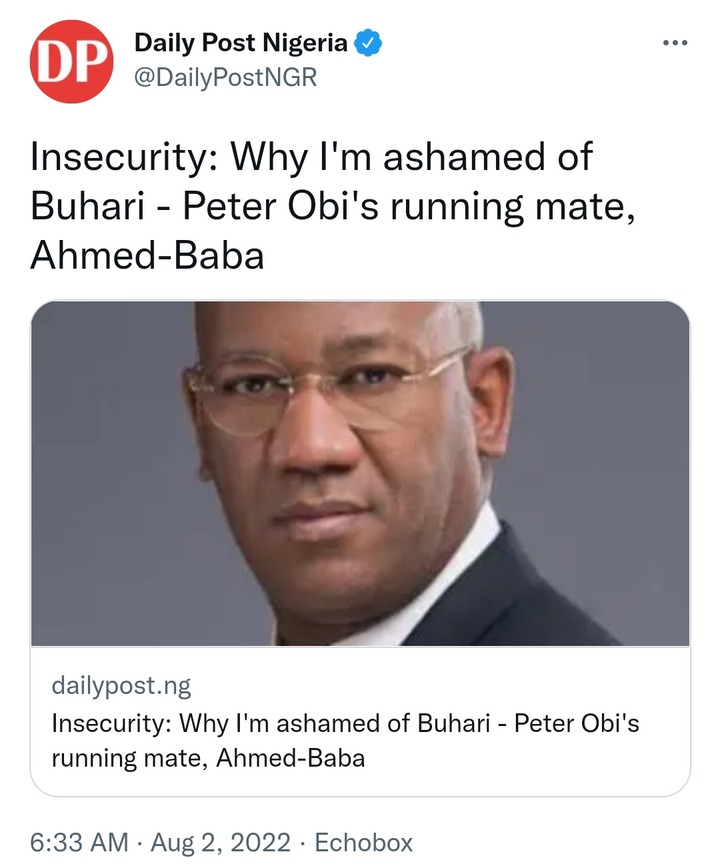 Yusuf Ahmed-Baba, the Vice-Presidential candidate of the Labour Party, LP, on Monday accused President Muhammadu Buhari of failing to tackle insecurity in the country.

Ahmed-Baba said he was ashamed that Buhari had failed to secure Nigeria despite all his talks about tackling the menace.

He spoke on Channels Television’s Politics Today, while reacting to how LP’s presidential candidate, Peter Obi intends to tackle insecurity.

Ahmed-Baba assured Nigerians of their safety if Obi wins the 2023 presidential election. 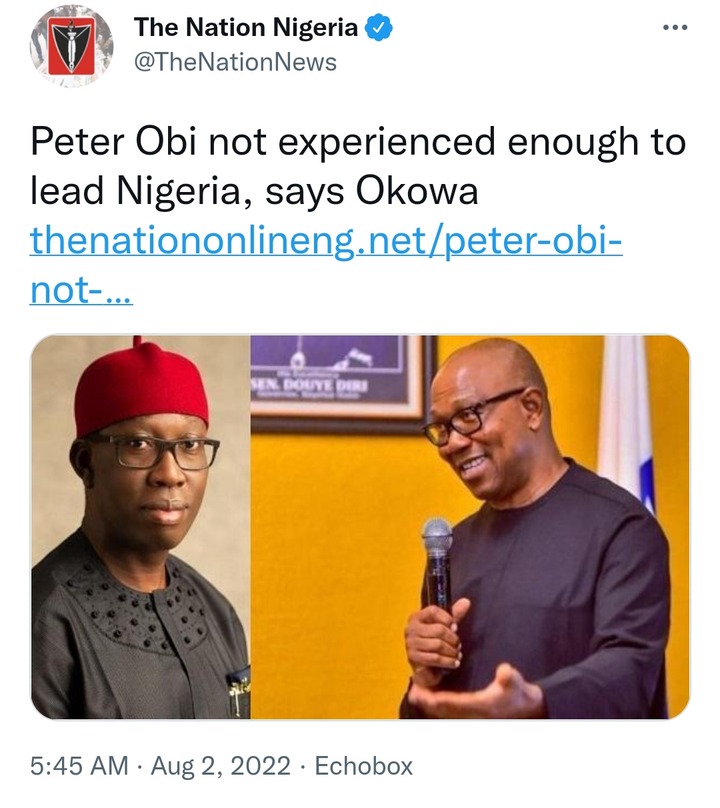 Delta Governor Ifeanyi Okowa has described the presidential candidate of the Labour Party (LP), Peter Obi, as too inexperienced to lead Nigeria.

The vice-presidential candidate of the Peoples Democratic Party (PDP) stated this in an interview with BBC pidgin.

Obi, he said, may have been a former Governor but the experience is not ‘’deep’’ enough to lead Nigeria.

Speaking on the crisis in the PDP, Okowa said he is making efforts to reach out to Rivers Governor Nyesom Wike.