By SportsBible (self media writer) | 18 days ago

Manchester United missed the opportunity to go top of the Premier League table after their much-anticipated match with Everton ended 1-1. 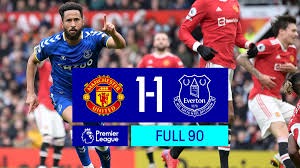 Anthony Martial scored for Manchester United just before halftime and it looked like they would go on to win the game when the second half began as the first ended. However, it didn't happen that way though as Andros Townsend equalized for Everton against the run of play.

The goal was the result of a quick counter-attack but it was preventable. Fred had 2 chances to recover the ball before Everton crossed the center line but he didn't utilize both. A world-class defensive midfielder might have prevented Manchester United from conceding that goal.

Manchester United spent big in signing Jadon Sancho, Raphael Varane, and Cristiano Ronaldo. They knew they needed a defensive midfielder but they chose to use the last transfer window to improve every other position but that.

So far it has proved to be a mistake as only the signing of the Portuguese international has improved the team. Sancho is still adapting to the club's style of play and on the other hand, they have only kept one clean sheet in all competitions this season despite having Varane. The French International is not to be blamed though as the back 4 is not adequately protected.

The fact that Solskjaer has tried different combinations in the pivot this season shows that he recognizes that none of the current players who play in that position are good enough.

Manchester United was linked with Ruben Neves and Eduardo Camavinga in the last transfer window but they didn't make an official bid for any of the two players. The latter has joined Real Madrid and he is proving to be a good signing for the Spanish club. Neves on the other hand is still at Wolverhampton.

Whether the club will finally make a move for him when the January transfer window opens remains to be seen but one clear thing is that they can't challenge for the title this season without signing one.