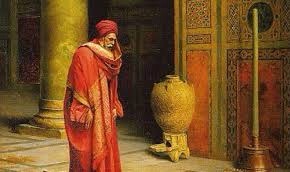 Malik bin Anas popularly known as Imam Mālik by Maliki Sunnis, was an Arab Muslim jurist, theologian, and hadith traditionist. Imam Malik was born in Medina circa 711CE to Anas ibn Malik and Aaliyah bint Shurayk al-Azdiyya. His family was originally from the al-Asbahi tribe of Yemen, but his great grandfather Abu ‘Amir relocated the family to Medina after converting to Islam in the second year of the Hijri calendar, or 623 CE.

Living in Medina exposed Malik to some of the most learned minds of early Islam. He memorized the Quran in his youth, learning recitation from Abu Suhail Nafi’ ibn ‘Abd ar-Rahman, from whom he also received his Ijazah, or certification and permission to teach others.

He studied under various famed scholars including Hisham ibn Urwah, Ibn Shihab al-Zuhri, and along with Abu Hanifa, the founder of the Hanafi Sunni Madh’hab—under the Shia imam from the household of the Prophet’s lineage, Jafar al Sadiq.

According to classical Sunni tradition, the Prophet Muhammad foretold the birth of Malik, saying: “Very soon will people beat the flanks of camels in search of knowledge and they shall find no one more expert than the knowledgeable scholar of Medina,” and, in another tradition, “The people … shall set forth from East and West without finding a sage other than the sage of the people in Medina.”

While some later scholars, such as Ibn Hazm and Tahawi, did cast doubt on identifying the mysterious wise man of both these traditions with Malik, the most widespread interpretation nevertheless continued to be that which held the personage to be Malik.

Perhaps Malik’s most famous accomplishment in the annals of Islamic history is, however, his compilation of the Muwatta, one of the oldest and most revered Sunni hadith collections and one of “the earliest surviving Muslim law-book[s],” in which Malik attempted to “give a survey of law and justice; ritual and practice of religion according to the consensus of Islam in Medina, according to the sunna usual in Medina; and to create a theoretical standard for matters which were not settled from the point of view of consensus and sunna.

Claimed to be “the soundest book on earth after the Quran” by al-Shafi’i, the compilation of the Muwatta led to Malik being bestowed with such reverential epithets as Shaykh of Islam, Proof of the Community, Imam of the Abode of Emigration, and Knowledgeable Scholar of Medina in later Sunni tradition. Another of his work is the Mudawwana al-Kubra, written down by Sahnun ibn Sa’id ibn Habib at-Tanukhi (c. 776-7 – 854-5) after the death of Malik ibn Anas.

Malik died at the age of 83 or 84 in Medina in 795 and is buried in the famous Jannat ul-Baqi cemetery across from the Mosque of the Prophet. Although there was a small shrine constructed around his grave during the medieval period, with many Muslims visiting it to pay their respects, the construction was razed to the ground by the Kingdom of Saudi Arabia during their campaign of demolishing many of the traditional Islamic heritage sites after the kingdom’s establishment in 1932.