What you don't know about Female Circumcision; see countries who still practice this and why they do

Female Circumcision is the popular name. But there is an official name For it called Female Genital Mutilation (FGM).

Female genital mutilation (FGM) is a harmful traditional practice that involves the cutting or removal of the external genitals. It is typically found in traditional group or community cultures with patriarchal social structures. 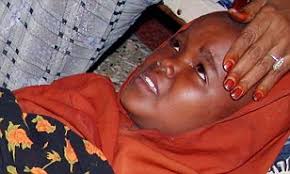 So what do we know about the origins of FGM?

Although FGM is practised in some communities in the belief that it is a religious requirement, research shows that FGM pre-dates Islam and Christianity. Some researchers have traced the practice to Egypt in the fifth-century BC and argue that the geographical distribution of FGM suggests that it originated on the west coast of the Red Sea.

Egyptian mummies show women infibulated and this is supported by a Greek papyrus in the British Museum dated 163 BC. A Greek historian and geographer in the second-century BC reported that a group along the eastern coast of the Red Sea cut their women in “Egyptian style” and that another group “cut off in infancy with razors the whole portion that others circumcise”. Curiously, today FGM is referred to as “Pharaonic circumcisions” (i.e. Egyptian) in Sudan and “Sudanese circumcision” in Egypt.

There certainly appears to be a link between FGM and slavery. In 1609, dos Santos reported that a group near Mogadishu, Somalia “had a custom to sew up their females, especially young slaves to make them unable for conception which makes them sell dearer, both for their chastity and for better confidence which their masters put in them”. Browne reported in in 1799 that Egyptians practised female circumcision and infibulation to prevent pregnancy in women and slaves. Egyptians raided and traded the Black south for slaves from dynastic to Byzantine times and Sudanese slaves were exported through the Red Sea to the Persian Gulf before the rise of Islam.

Female genital Mutilation has been recorded in 30 countries. Africa has the highest population of mutilated cases out of the general cases as well as the middle East and Asia.

The procedure varies with respect to the ethnicity. Current estimation by the WHO ( world health organization) shows that around 90% of mutilated cases underwent this Mutilation over the age of 15years and the procedure used was;

And the remaining 10% which covers over 8 million women are:

Infibulation happens to be the most severe of them all and happens to be mostly practice in Africa. North eastern part of Africa covering Djibouti, Eritrea, Ethiopia, Somalia and Sudan

In Nigeria, FGM has the highest prevelence in the South South (77%) amongst Adult women followed by the South East (68%) and south West (65%). It seems to be least practiced in the North. 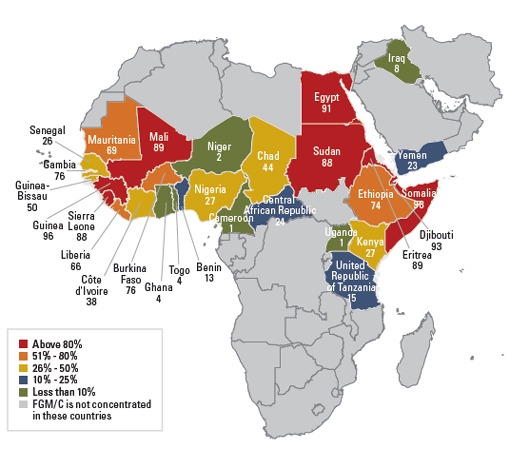 REASONS BEHIND THIS PRACTICE

FGM is associated with cultural ideals of feminity and modesty which includes the notion that woman are a beautiful creatures and they can be only be seen as beautiful and clean when parts that are percieved as being unclean are cut off or removed from their body. Although there is no religious or scriptural backing for this but amazingly it has thrived for so long and it's still practiced till date...