By gistnodeyfinish (self media writer) | 20 days ago 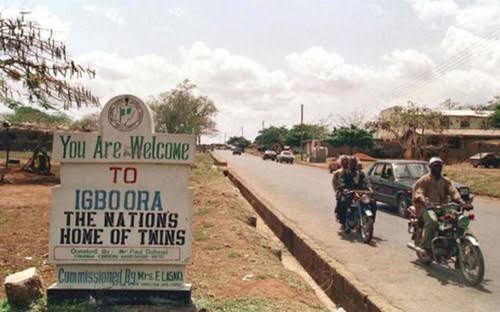 Agriculture is the primary occupation of the community's approximately 92,000 residents, according to the 2006 census. The large number of births in the community, which is home to many local and international researchers, is what makes it unique.

According to research, the rate of twin births in Igboora has surpassed that of Kodinji in India and Candido Godoi in Brazil. The town, dubbed the "Twin Capital of the World," has 30 times the number of twins as the rest of Europe.

The people of Igbo Ora do organise a festival known as the "World Twins Festival" to thank God for His blessings and also allow twins from different households to meet and interact with each other.

The Igbo Ora people believe that children are not just a gift from God but also a treasure from God. They believe having twin babies bring happiness and prosperity to their families as well as the entire community.

The festival also raises awareness for those who continue to practice the barbaric practice of viewing twins as taboo. They should see how we in this part of the world celebrate the uniqueness of twins. Twins should be celebrated rather than killed.

The story of the Igbo Ora town is indeed an interesting one and you don't need a soothsayer to tell you that Nigeria is blessed.

Benefits Of Forgiving Your Ex And Your Partner

When Everybody Loves You, You Hardly Grow To The Next Level- Blessing CEO Says

5 Female Behaviors That Men Love More Than Anything