Early Symptoms that will tell you are Pregnant

By DrGeraldine (self media writer) | 11 days ago

The earliest signs of pregnancy appear in the few weeks after conception. Pregnancy normally has effects on all the major parts of the body systems and that will produce a lot of physical changes like missed periods, nausea, vomiting, pelvic pain, tiredness, tender breasts, and even heartburn.

Women's body systems are different and so will their symptoms also be different from one pregnancy to another but there are some common pregnancy signs that will be experienced by almost every woman.

Early Pregnancy Signs And Symptoms That You Should Not Ignore:

1) Amenorrhea or Cessation Of Menstruation:

This is unarguably one of the earliest signs of being pregnant, Most women don't have their normal periodic bleeding once they become pregnant.

This is normally caused by the pressure caused by the expanding uterus on the bladder thereby leading to a frequency of urination.

This is one of the most common side effects of being pregnant. It is connected to the rise in estrogen and also pregnancy hormones like human Gonadotrophin.

This normally occurs about 14 days after conception, most women mistake this as their normal bleeding but this isn't it at all. It is a small amount of bleeding or spotting which is also known as Implantation bleeding.

Hormonal changes during the early times of pregnancy can make a woman's breasts to be sensitive, tender, and even sore. With this also comes the feeling of being full or heavy. This is normally caused when the pregnancy hormones increase leading to a mire supply of blood to the breast, this will also cause a tingling sensation on the woman.

Hormonal Changes will also cause the digestive system not to work properly, it will slow down thereby leading to constipation

A lot of women complain about this during their pregnancy, especially in their first trimester. It is normally caused by morning sickness.

Flooding of hormones during early pregnancy can cause a woman to be weepy and emotional. It is actually very natural, just the hormones trying to adjust in the body.

During the early weeks of pregnancy, progesterone hormone increase causes heartburn but during the later period of pregnancy, it is caused by the baby putting pressure on the stomach

Another negative side effect of pregnancy is the back pain also caused by the progesterone hormones, it will loosen the pelvis ligaments thereby resulting in pain and instability. 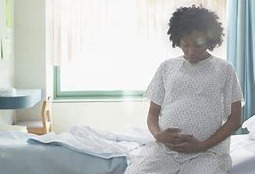 Pregnant women are always very sensitive to any smell that comes around them as there is an increase in their sense of smell.

Hormones and also the increase in the volume of blood can also lead to headaches during the first trimester of a woman's pregnancy.

Pregnancy hormones such as progesterone will make a pregnant woman always be hungry and also have all sorts of cravings.

This is caused by the dilation of the blood vessels and also the drop of the blood pressure in pregnant women causing them to feel dizzy and also to feel light-headed.

16) Increase in the basal temperature:

This is a positive sign of pregnancy, it is an increase to about 0ne-degree temperature, this lasts for over 2 weeks.

If you have any or all of these signs or symptoms above, it means you are pregnant