What have we done to deserve dogs, is what you often hear by folks obsessed with dogs, whenever a dog does some heroic act.

I have nothing against dogs. They are arguably the closest animals to humans and they've sometimes saved people's lives.

Dogs are often loyal animals and I believe God created them to assist us in doing certain things, while we, in turn take care of them.

In almost every airport around the world, dogs help in fishing out illegal drugs and other harmful stuff due to their strong sense of smell.

Also, most Police Departments use dogs as they go about their duties as law enforcement agents.

There are also Service Dogs, who assist people that are indisposed to do certain things for themselves.

The list of good things dogs can do is endless. Still, that should not in anyway make anyone shamelessly say dogs are equal to humans. (In Brazil, these infant twins were killed by their mother's dog. Children are our future, not dogs)

From time immemorial, humans have a way of changing the true nature of things to something else. No wonder in Eccle. 7:29 Solomon said God made everything good but humans have sort out their own inventions.

The current idolization of dogs by many is cause for concern.

You'll be amazed to know that for some folks, if a dog and a fellow human are in a life and death situation, they'll go out of their way to save the dog and leave the human to die.

They'll justify their act by listing all the good things dogs do in comparison with all the bad humans do.

I've heard crazy and ludicrous remarks like: Dogs don't cheat; dogs don't lie and they don't stab you behind your back.

Humans, on the other hand are guilty of the aforementioned vices, thus they are evil and untrustworthy.

But these deluded people fail to realize dogs are incapable of doing everything they listed as the vices of humans. It's like saying trees don't steal and don't backbite. For goodness sake they are inanimate. The same way dogs also don't have the mental capacity to do any of the things they listed. 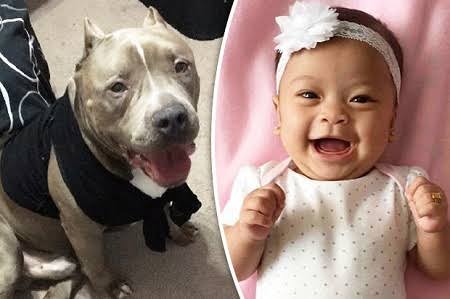 All over the internet we see dog obsession gradually permeating the fabrics of society. Whenever a dog attacks someone people would justify it by saying it was provoked.

Some folks would emphatically say they'd rather have dogs than children. They regard children as evil, while their dogs are innocent fur babies.

These days, people hardly refer to themselves as dog owners. They call themselves dog parents. And even when they have kids they say their dogs are either brother or sister to their human babies.

All over the world, especially in the west, there are endless stories of how a dog attacked and killed a baby.

In most cases the dog lived in the home and was treated as a member of the family. And then out of nowhere it snapped and mauled a child to death.

Children are the future. Without them the world will go into extinction. And we must all do everything we can to protect them.

Adults too are sometimes victims of dogs attack. The cases are just too many. Singling one out will be an understatement of what is really happening in our world.

And each time these attacks occur, the dog defenders will quickly point out that humans are also guilty of killing fellow humans so why should dogs be singled out for verbal attack.

The fact that humans created in God's image will be compared to dogs is a reflection of the moral decadence in our society.

It's imperative to note that no other animal is accorded as much reverence as dogs. Camels, Bulls, Pigs, horses etc all serve humanity in one way or another. Yet, some regard them as inferior to dogs.

In Yulin, China there is an annual festival where dogs are killed and eaten. It's often nauseating to watch, especially how the animals are tortured before they're killed.

These dog obsessed people will sometimes travel all the way from America and Europe to China just to speak out against the barbaric act metted out against the animals. Hollywood celebrities sometimes speak out too as they wipe the tears from their eyes.

Yet, these same people would look away if another specie of animals were to suffer the same fate, or even a human.

Some would say Dog turned backwards is God and that signifies how sacred dogs are. They go as far as saying dogs give unconditional love.

Personally, I see this as a form of narcissism. Some folks don't want anyone to point out the wrongs in their lives so they conveniently get a dog.

A dog does not care if you're a serial killer, rapist, robber, terrorist or pedophile. As long as you take care of it you can be rest assured it will stick with you. And for some that is unconditional love.

That human beings would seek validation from a dog is quite sad.

Just last week in Florida a man and his 11 year old daughter were shot and killed by a dog owner. This was after they'd reported his dog to local authorities for running amok and even attacking them in their home.

For many dog obsessed folks, taking a human life because of a dog doesn't mean a thing.

Scripture tells us repeatedly to mind our business and not to interfere in other people's affairs.

However, when some people start acting in ways that puts the lives of others in danger then it is time to speak up.