For decades the teak tree trade was huge in Thailand with devastating effects. The trade destroyed the forests, and it turned the beautiful wildlife who lived there into slaves.

While you might expect that heavy machinery was used to fell trees, that wasn’t the case. Elephants were forced to haul heavy logs on their backs. Twigs and branches scraped their bodies and eyes as they were forced into this labor.

By the late 1980s, the forests of Thailand were so far gone it was impossible to ignore. Finally, the government decided that it needed to do something. In 1989, Thailand enacted a ban on commercial timber logging. 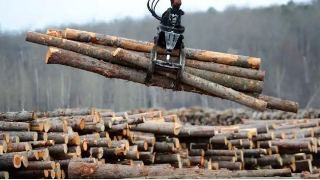 This was a grand piece of legislation that passed as the country desperately needed to stop this logging epidemic. One thing the bill didn’t cover, however, were all of the now-unemployed and traumatized elephants.

Tragically, though the practice was put to a stop, it left scars emotional and otherwise. Many elephants were left blinded from their hard labor. They lacked instinctual training and survival techniques. So how were they expected to return to the wild under these conditions?

Luckily, Dr. Samart, a veterinarian, and his wife, Khun Fon, wanted to do something for these helpless creatures. They started Elephants World, which helped provide food and shelter to local elderly and injured elephants. Their motto was: “Where we work for the elephants and the elephants not for us.” 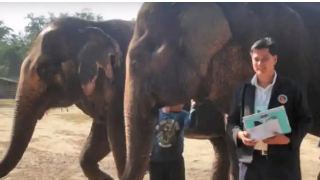 They began fundraising to help them continue their mission. Within no time, Elephants World began to spread online and interests from tourists began to peak. They became financially able to host more than 30 elephants and about 130 employees. 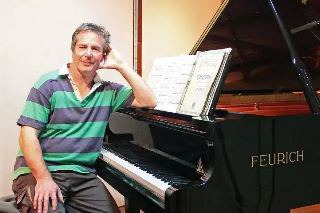 This was when Paul Barton walked into the picture. Paul was enamored by the piano after hearing an impromptu from the late composer Franz Schubert as a child. He was determined to learn to play.

At the age of 12, Paul taught himself to play the piano on other people’s instruments. He and his father played music in a small seaside town in northern England which led to Paul making music his life’s work. But the piano wasn’t his only passion. 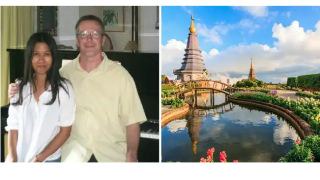 Paul loved to travel. In 1996, Paul planned a visit to Thailand where he taught piano for three months. There, Paul met Khwan, his future wife. He didn’t just fall in love with her, he fell in love with Thailand and the couple, along with new daughter Emelie, decided to make the nation their home.

In June 30th 2020, while exploring the countryside of Kanchanaburi, Thailand, on the banks of the River Kwai, Paul discovered something that would ignite a new passion in his life. In fact, it was a passion he could easily pair with his love for music. 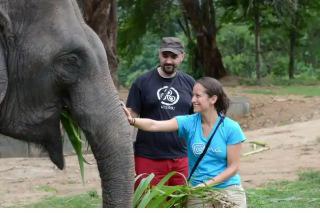 .  While doing research about the area and its wildlife he learned about Elephants World and how the sanctuary hosted old, injured, and handicapped elephants. Paul, an animal lover, was eager to go visit the sanctuary to see how he could get involved.

Paul didn’t go to the sanctuary alone, though; he brought an old friend with him: his piano. He had previously worked with blind children using music therapy and saw the impact it had made on them. He suspected it might just have the same impact on the elephants…

Surprisingly, elephants and humans share similar neurons in their brains. Both humans and elephants remember trauma, so if the piano could help his human clients cope with trauma, he thought the elephants traumatized from their time in the timber industry could benefit from his playing as well. But it wasn’t easy. 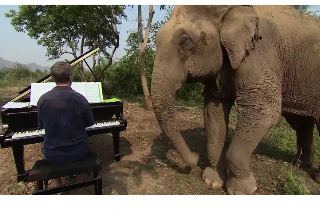 Paul pushed his piano all the way up the mountain to get it to where the elephants were. When he reached the top, he set up his piano and began playing Beethoven. There were a few elephants around, but one quickly noticed Paul’s presence.

A blind elephant named Plara was closest to the piano and was enjoying a grass breakfast when the music made him stop dead in his tracks. He picked his head up, grass still in his mouth, and walked toward the piano.

Paul recalled, “You are communicating with them in a different language. That language is neither ours nor theirs. There is something infinitesimally wonderful in a piece of Beethoven that connects me to that elephant, and that feeling is otherworldly.”

It’s hard to tell who enjoyed the music more, Paul or the elephants. He decided to make his visits a regular thing. He stated, “Some elephants get very close to the piano of their own accord, they might drape their trunk over the piano even.” His bond with the elephants became so strong that it led to a major change in his life. 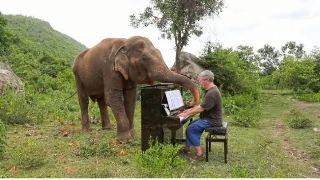 .   You see, Paul visited so often that eventually he and his family moved to the sanctuary permanently so that he could always play music for the elephants. Sometimes even wild monkeys stop by his concerts for a listen. It sounds like music really does soothe the savage beast.

Paul feels, “The elephant has worked for humans for too long. What is the little thing I can do as a human to say sorry, for my species for what we have done to them?” Pauls beautiful sentiment was also recently realized by a group of rural villagers in India.