Pets seem to have an innate sixth sense that helps them pick up on subtle energies—and dangers—that we can’t. Alhanna Butler and her fiancé, Ricky, of South Yorkshire, England, learned this firsthand with their Akita Inu dog, Keola.

See, Alhanna and Ricky had been trying to have a baby for a while, and they couldn’t believe their luck when they’d finally gotten pregnant. They were excited to start a family, but Keola didn’t seem to agree…

The otherwise peaceful dog began acting strangely. She’d poke and whine and keep her nose pressed against Alhanna’s belly for hours at a time. She was always lying as close to her owner as possible. 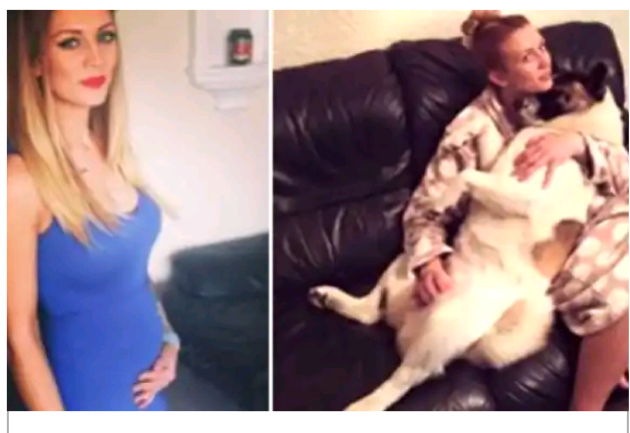 Alhanna had no idea what had gotten into her dog. She decided to ignore the odd behavior, but she would soon realize that was a mistake—and that Keola was actually trying to tell her something incredibly important!

Meanwhile, Alhanna’s pregnancy went off without a hitch, and she was excited to experience motherhood. Although she felt great, it became harder and harder to ignore Keola’s increasingly strange behavior.

Even Ricky noticed that Keola was spending a significant amount of time hovering around Alhanna wherever she sat. At first, the couple just thought it was an odd phase…

In the eighteenth week of her pregnancy, however, Alhanna suddenly developed a sharp pain in her back. It was so strong that she could barely walk. Worried over what this could mean for their unborn child, Ricky rushed her to the hospital.

Oddly, the doctors couldn’t find anything wrong. They told Alhanna she was suffering back pain because the weight of the baby was putting stress on her body. Alhanna believed them, and she went home.

As soon as Alhanna returned home, she logged in to Facebook and told her friends about her situation. Almost immediately, they told her to listen to Keola’s instincts. Even though the doctors couldn’t find anything wrong, the dog was likely sensing a very real problem.

Alhanna’s mother finally persuaded her to go to the doctor for more tests. She was certain Keola’s behavior wasn’t a coincidence. Sure enough, after a series of examinations, Alhanna found out she had a double kidney infection—and she was actually close to death!

Alhanna was immediately placed on a serious antibiotic regimen, and she received all the proper care she needed to reverse her kidney damage. A few weeks after her treatment ended, she gave birth to a beautiful baby boy named Lincoln!

As soon as Alhanna brought her new son home from the hospital, Keola was instantly smitten with her new human friend. It was almost as if she knew how close Lincoln and his mother were to danger the whole time.

Now, Keola spends as much time as she can with her new little brother! Even though she’s a big and powerful animal, she knows exactly how to be gentle when she spends time cuddling up with Lincoln.

At first, Alhanna and Ricky were both a little nervous about letting Keola spend so much time around Lincoln. They monitored the pair, but the pup soon proved that she was more than fit to keep a watchful eye on her little friend.

Amazingly, Lincoln wasn’t frightened at all by Keola. He was able to fall asleep easily whenever she was around, and she loved to give him kisses when he was snoozing. She treated him like he was her own puppy!

Now, Keola and Lincoln love going for walks around their neighborhood with Alhanna and Ricky. As soon as Keola sees Alhanna dressing Lincoln up, she jumps around with excitement because she knows it’s playtime!

Keola even hangs out with Lincoln while he plays in his pajamas. Most dogs don’t have the patience for this kind of thing, but check out this photogenic pooch! She was more than happy to pose with her best buddy.

Keola and Lincoln are truly an inseparable pair, and Alhanna and Ricky are thrilled that they took to each other so quickly. Just look at that grin! There’s no place in the world Lincoln would rather be than sitting next to his four-legged friend.

Alhanna and Ricky have a great life together in South Yorkshire. They have plenty of friends, and now that Lincoln’s in their world, they’re able to bring him along to all of their social events. Their neighbors love his company, too!

Alhanna thinks about her close call with death nearly every day. She can’t believe that Keola’s intuition was correct. Had she believed the initial doctor, she wouldn’t have survived. Keola is truly the cornerstone of this beautiful family, and she’ll always be cherished for it!