The whale shark isn’t related to blue whales or orcas, despite its name. It’s simply a shark, the largest in its family. This huge fish is hard to miss, although difficult to find. Continue reading to find out more about this beautiful animal. 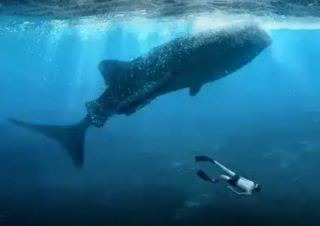 As we said above, the whale shark is a kind of shark, even though it’s a bit different from the most common ones. In addition, they’re quite large: the largest specimen recorded was nearly 40 feet long and weighed 21 tons.

Some sailors claim to have found much larger whale sharks, about 55 feet long, but some believe these are mere exaggerations because there’s no scientific evidence of it.

The nose of a whale shark is round and flat. Their mouth is huge, in fact, it can be over 5 feet wide. They open it to suck water in and filter any animals they can eat at the same time. The inside of their mouth has several rows of teeth, but they don’t use them to hunt or eat. In fact, they’re quite small.

The most characteristic physical attribute of these animals is their color. They’re dark gray, which sort of fades and whitens towards the belly. The skin of this type of shark has horizontal and lunar lines all over; it kind of reminds you of a chessboard. Each “motif” is unique to every specimen and biologists use them to tell them apart.

Whale sharks have two pairs of dorsal and pectoral fins. On the tail, they have a large rear flipper they use as a propeller to swim. However, they’re not too agile and move slowly when compared to other animals of their size.

The behavior of a whale shark

The whale shark is generally a solitary animal. It’s rare to find them in groups, despite the fact that you may find three or four sharing the same space in areas with lots of food.

Little is known about the habits and behavior of this animal because they’re elusive and discreet. Their small population and the enormous habitat they occupy make it hard for scientists to monitor them. 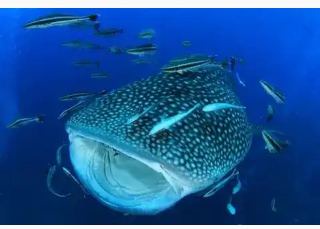 The whale sharks feed passively, that is, they don’t hunt. They just open their huge mouth and eat whatever goes in.

There are other sharks that move towards their prey to eat them. However, these sharks remain still. They pump the water into their mouths and filter it through their huge gills. They’re capable of filtering up to 6,000 liters (1580 gallons) an hour: anything that doesn’t come out of the gills is their food.

The habitat of a whale shark

These types of sharks prefer warm waters, which is why they’re rarely far from tropical areas. Some say they live between the meridians located at 30 degrees, both north, and south.

In addition, it’s common to find specimens in the Yucatan peninsula, the islands of Honduras, the Galapagos Islands, the Philippines, Thailand, the west of Australia, etc. They certainly like the tropics.

However, there have been sightings much further north, such as on the shores of New York and much further south, in South Africa. They’re supposed to be migratory animals, but we don’t know enough about them to know their migrating habits.

The largest concentration of whale sharks takes place in the Philippines between the months of January and May. Due to the weather conditions in that place, there’s a large amount of food and that’s why they flock to the Pacific shores.

You can’t mistake a whale shark for any other animal. The spots on their skin are unique in the animal kingdom and despite it not being the largest animal in the world, it’s definitely the largest fish. Remember, they’re completely harmless to people and even to other animals (except their food!)