By crazygist (self media writer) | 2 years ago

In the wildlife some animals might be a predator chasing their prey and in the next, they might be the prey. However, some predators do not fear any animal as they are not hunted by any other animal except humans. They are the deadliest predators in their territory.

Here is the list of the 6 most dangerous predators of the world.

Weighing up to 110 Kg and measuring up to 10 feet, Komodo Dragons are the largest living lizards found on Earth. These terrifying creatures are venomous and usually prey upon dead animals, pigs, and water buffalos. They have an acute sense of smell and can scent a dead animal from a distance of up to 9.5 km. They are indigenous to the Indonesian islands of Rinca, Flores, and Gili Motang. 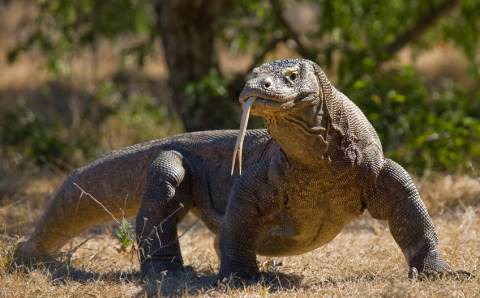 Next on our list is the fastest animal on land, capable of running at a speed of 140 km/h, it is the Cheetah. Cheetahs usually weigh about 65 kg and measure 5 feet in length. Their strong jaws and flexibility allow them to climb trees while holding their prey in their mouths. Listed as Vulnerable on the IUCN Red List, Cheetahs can be found in grasslands and open plains of Africa and South America. Weighing between 350–700 kg, Polar bears are the largest land carnivores currently in existence. Polar bears usually hunt seals and fishes for their survival. Polar bears spend the majority of their life swimming in the sea and can swim up to 105 km at a stretch. They have a 10 cm (4 in) thick layer of fat under their skins to protect them from cold and harsh climatic conditions. They are found chiefly in the Arctic circle.

This list would not have been complete if we didn't consider 'the King of the Jungle'. Lions can weigh up to 220 Kg and can measure up to 6 feet in length. They hunt in large groups called 'pride' which enables them to kill large animals like giraffes and hippos. Lions spend most of their day sleeping; they are inactive for about 20 hours per day. Lions are usually found in the savannas and grasslands of Africa and Eurasia. Regarded as the deadliest sea creature out there, the Great white shark is the apex predator of the oceans. Measuring 20 feet in length and weighing up to 2200 kg, the Great white shark is responsible for more recorded human bite incidents than any other shark. They normally prey upon dolphins, turtles, seals, and other small sharks. Great white sharks use their sharp sense of smell to hunt. However, They also have a unique organ that can detect the electromagnetic field generated by the animals and that helps them to locate their prey more precisely. Great white sharks are usually found in coastal and offshore waters all over the world.