The untapped wealth of the Nigerian Animal Kingdom:A tale of a strange animal killed by a soldier.

By Market_Intelligence (self media writer) | 2 years ago

To many who have have lived their teenage years in the village, it would come as no surprise how the tip of their fingers may not hold stock for the number of creatures they have set their eyes on without a name. 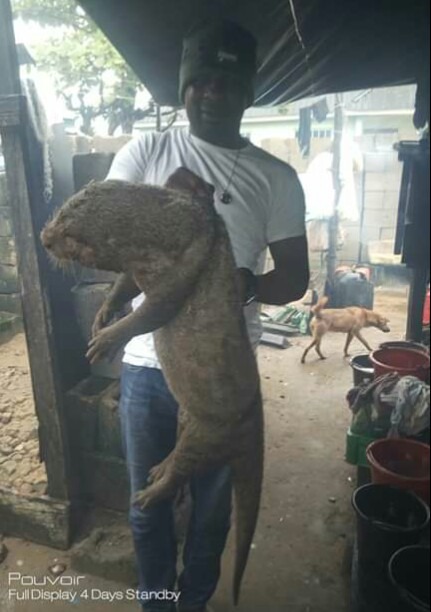 An unidentfied soldier in mufti holding the prize of his kill.

Right there holds the key to unlocking a venture or I would rather say an industry that could attract white foreign animal expedition specialist into our jungles.

Either for study purposes or for pleasure, the country is vast in ever green rain forests, monsoons and arid land and can thus provide a Paradise for foreign folks. That to me is a healthy blend of vegetative ecosystem that can house a large variety of animals, both known and unknown to the western world.

A testament to this fact is the true life story of an unlabelled animal that was gunned down in the creeks of the Niger Delta by a soldier.

Stationed to safe guard one of the oil and gas installations, he left his security post to defecate at the river bank. With his gun closely strapped to his side, he briskly walked through the bush path that should lead him on to the mouth of the sea.

On getting to the point where he vegetation meets sandiness, he sighted a creature through the fans of the bush.

He had to pause his body movement with utmost consciousness so as not to alert the sensitivities of the unsuspecting animal.

He dropped to the ground to pick his aim, and he strained the barrel of his rifle towards the animal as he seized his breadth.

While the animal was distracted by its fish feasting, he pulled his trigger and what appeared to be a grieving sound was heard a few yards away.

He was sure he had neutralize his prey. He called the villagers around to help him carry his game to one of the houses of a villager he had made friends with earlier.

And that was the end of an animal in which not anyone of them could place a name to it.

Staring at that animal, it is not one I have ever set my eyes on since I began watching National Geographic over twenty years ago.

This would have been an animal everyone delighted about nature and animals could have loved to watch and even understand through biological lenses. It could have been trapped to and caged by the hunters in the village, in exchange for foreign exchange( Dollars, Kudi, Ego).

Poverty could be a thing of the past and if we so ever wish to enjoy Dollars and Pounds without government aid, then rural communities must start to think like Kenya and South African game reserve initiatives.

Disclaimer: This should not be seen as an aberration of Opera News laws, as with express permission the soldier granted the writer rights to publish this without revealing the details of his name.