By A.dekoya (self media writer) | 2 years ago 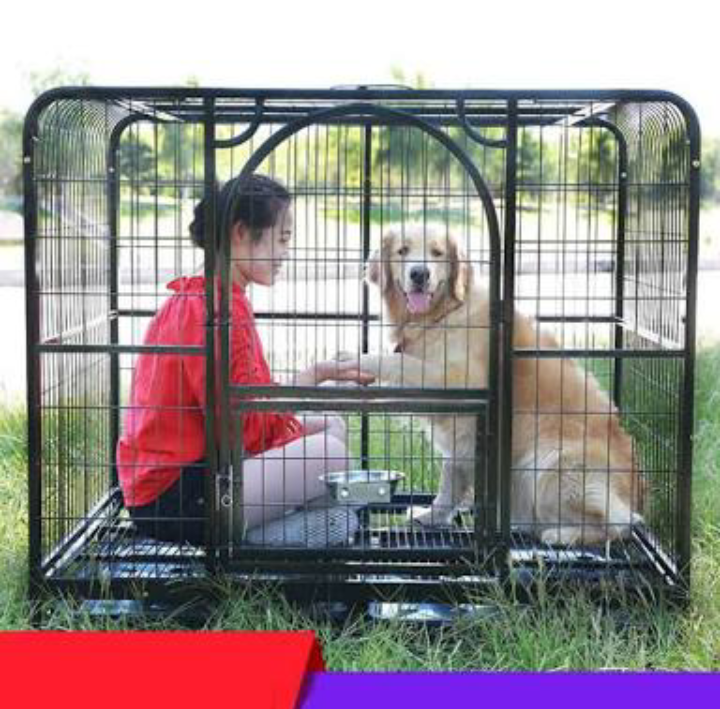 Crating or crate training your dog is a great way to keep your dog from causing any trouble when he is not yet properly trained. Crating is also a great potty training tool as well. Dogs will tend to hold it in rather than soil their crate which is viewed by them as their personal territory and when let out of the crate they will go and relieve themselves after you take them to an appropriate area. Crate training will develop your dog's control of their bladder and bowel movements. Depending on your dog the crate training process can take anywhere from several days to several weeks.

It can take some time for your dog to get comfortable with their crate so you need to introduce the crate slowly. Put the crate in a room where he'll get a lot of attention.

To start off with put a soft towel or blanket inside the crate and play/talk with your dog near the crate. Next encourage your dog to enter the crate by putting some treats or his favorite toy just outside the door of the crate, then at the beginning of the crate and after that toss the treats all the way into the end of the crate. If he doesn't want to go in don't force him in, let him go at his own pace. Leave the crate door open during this process. This process can take anywhere from several minutes to a few days.

The next step is to feed your dog meals near the crate. After several meals put the food as far into the crate as he will go, if he doesn't go in start by putting the food in the beginning of the crate and place by food a little further into the crate each time until the food is in the back of the crate. When you think your dog is comfortable with eating in the crate close the door when he begins to eat and open the door as soon as he is finished. With each meal after that leave the door closed a couple of minutes longer each time until you reach about 10 minutes. If your dog begins to whine or cry while inside the crate don't let him out until he has been in there for the predetermined amount of time or he will do it every time. It is important that your dog is able to see you when they are in the crate.

When your dog is comfortable in the crate you will be able to confine him for longer time periods. To start off with call your dog over to the crate and give him a treat. Give a command to signal for him to go into the crate such as "bed" and encourage him to go in by pointing to the crate with a treat in hand. After he enters the crate reward your dog by giving him the treat and pet him and say "good boy/girl" then close the door. Next quietly sit by the crate for a few minutes then go into another room for a few minutes. Come back sit quietly by the crate for another few minutes then let him out of the crate. Repeat this process several times a day. With each successive repetition, slowly increase the amount of time you leave him in the crate and the amount of that time you are away from the crate. When your dog stays quietly in his crate for at least 30 minutes when you are away from the crate, you can begin to leave him crated when you leave the house for short periods of time or at night when he sleeps. This process can take anywhere from a few days to several weeks.

After your dog feels comfortable at being alone for 30-minute periods; you can leave him home alone. Give a command to signal for him to go into the crate such as "bed" and encourage him to go in by pointing to the crate with a treat in hand as in step 3. Vary the time from 5-20 minutes after you put him in the crate to leave so that your dog won't know when you have left. When you return don't make a big fuss over the dog but acknowledge him and let him out of the crate. You should periodically crate your dog for short periods of time when you are at home so he won't associate being crated as being abandoned by you. It is also a good idea to leave few toys in the crate to entertain your dog.

Get your dog into the crate by using the procedure in step 3. It is a good idea to put the crate by your bedroom or in the hallway just outside of your bedroom so that you can hear if your dog starts to whine which could be him telling you that signal that he needs to eliminate. After a few nights gradually move the crate away from your bedroom to the location where you want the crate to remain.

The crate should be just large enough for your dog to stand up in and turn around in without his shoulders touching the ceiling. If the crate is too large then your dog will find an area of the crate that he can soil.

Whining or crying when your dog is in there crate may either indicate that they need to be let out to eliminate or he just wants to get out. Wait a few minutes and if he's still whining go and see if he needs to eliminate and if you are pretty certain that he does then let him out to eliminate, after he is done bring him back to the crate, don't spend time playing with him. If your dog continues to whine but doesn't need to eliminate just ignore him. If the problem persists you may need to start the crate training process all over again.

Amount of Time In The Crate:

Too much time in the crate can be bad for your dog. Your dog will feel frustrated/trapped if he is in their for too long. In general, an adult dog shouldn't spend more than 8 hours a day in a crate while a puppy under 6 months shouldn't spend more that 4 hours at a time in the crate because they haven't developed their bladder and bowel controls and are prone to soil it.

Since dogs do not like to soil their "territory", when your dog is in their crate they will try to avoid eliminating when they are in there. That means that when they are released they will want to relieve himself. Let your dog out about every hour and give them four or five minutes to eliminate, if he does not eliminate return him to the crate, if he does then praise/reward him by giving him a treat, playing with them or giving them extra attention. If you feed your dog on a regular schedule, then he should eliminate at about the same time. Once you figure out his schedule, you can take him out to eliminate at the same time every day. It is advised that you put your dog in the crate about an hour before the scheduled elimination time to prevent him from eliminating early. Most dogs can be slowly weaned off crating as they get older, but your dog may be accustomed to the crate so it is a good idea to keep it around to allow them to nap in it.

You should never leave a choke collar or a leash on a dog when they go into the crate because they may choke themselves to death.

Content created and supplied by: A.dekoya (via Opera News )