The Society of International Nature and Wildlife Photographers (SINWP) contest is a competition for many professional wildlife photographers around the world, the photographers will summit their best wildlife shots of the year for assessments and the best ten photos will be selected for final round which a winner will then emerged. In the SINWP contest, photographer most capture animals in motion in the wild and sometimes the body may receive up to 10 thousand entries for a single contest in a year. Let’s take a look at the 8 top photos that made it to the final round this year.

1. Incredible shot of a leaping wildebeest 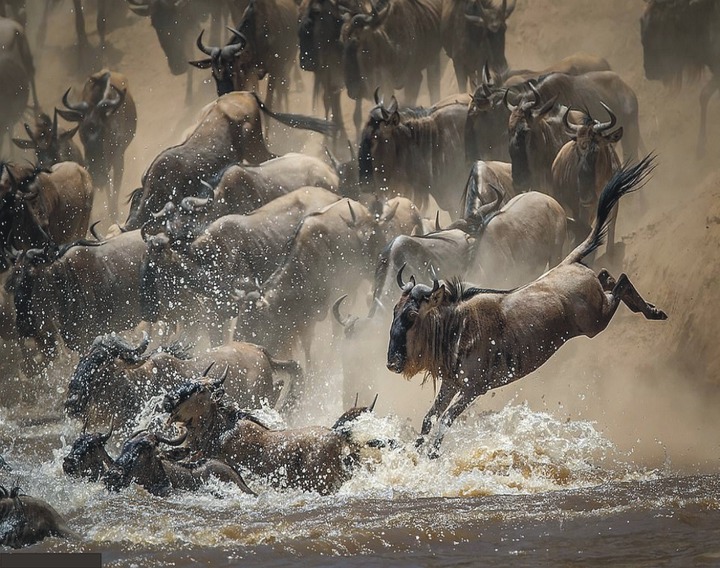 The photo was shot by Andy Howe’s and he emerges the winner of the SINWP contest 2020. Andy took the picture during the migration of the wildebeest in Kenya’s Masai Mara Reserve at a crossing point known as the Cub-de-sac; the photo captured the amazing moment when a wildebeest leaps into the river Mara and creating some splash of water caption which makes the photo unique. Every year the wildebeest migrate to another part of the country before the yearly drought begins, the journey which can cover thousands of mile and crossing of many rivers is always met with strong predators on the way, but it does not affect the population of the beast as they will keep giving birth as they journey to the greener pasture. 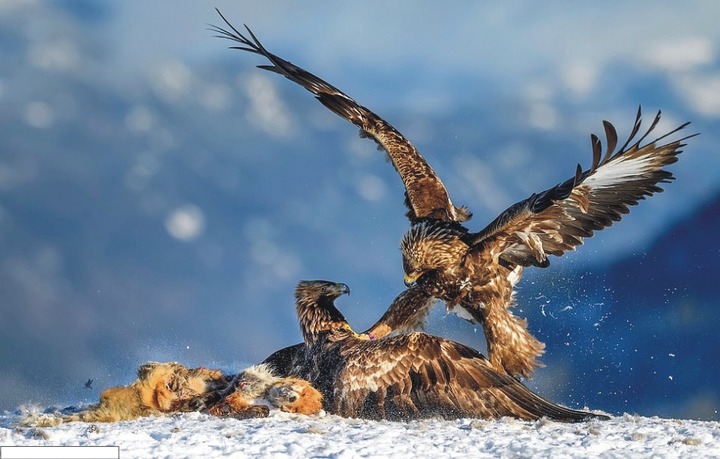 The photo was shot by Bjoern Stuedal in Norway; the photo was one of the runner-up and was highly commended, the image shows two eagle competing for the carcass of a dead fox. One of the eagles had lay claim to the fox carcass while telling the second one not to come close, the second eagle won’t give up so easily, it’s kept distracting to have its own share of the meal.

3. Photo of cheetah closing up on a baby gazelle 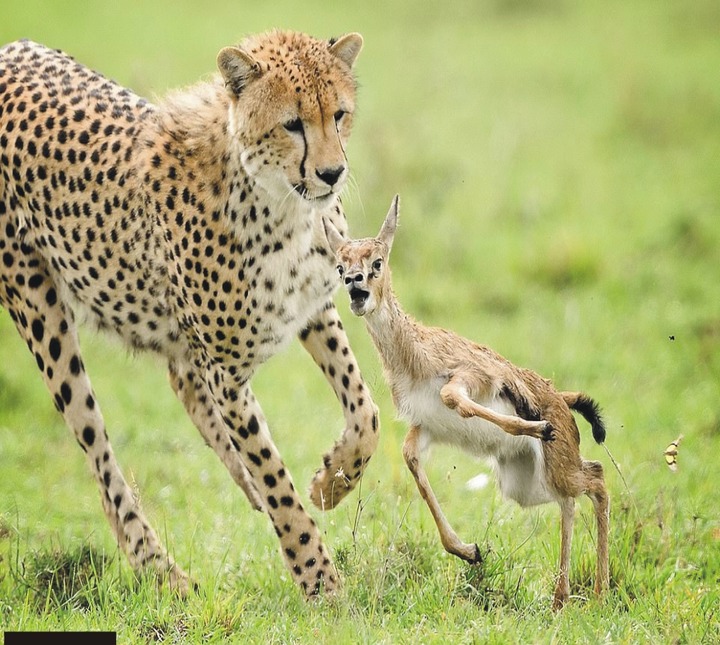 This photo was also shot by Bjoern Stuedal a Norwegian photographer, two of his photos made it to the finals and was highly commended as well. The image shows a cheetah closing up on a baby gazelle in what appears as a casual casing; gazelle are cheetah’s favorite meal, but most time they go for the adult and not the baby.

4. The photo of a running hare The photo was shot by Kevin Pigney in Cambridgeshire in the UK, a shot that won him the noble second runner-up prize of the competition; the image shows the hare running to its borrows. Hares are prey to foxes, they feed around their borrow and the bold once go a bit far away from their borrows, and when there is danger, the rodent will run back home for safety. The photo was captured by Paul Smith in the Hortobagy National Park in hungry; the shot was also highly commended and captured the eyes of many, but its unfortunate Paul did not win the noble prize. The photo shows two hoopoes birds sitting on a tree branch and sharing food with each other.

6. Picture of a bellowing stag These shot was made by Lee McCudden who emerged the overall runner-up; he took the picture of the huge beast in the Outer Hebrides. He has to follow the beast for two days before he could able to take a perfect shot.

7. The picture of kingfisher capturing a fish The image was captured by Paul Smith on the Alde River in Suffolk; the photo won the third prize and was highly commended as well, the picture shows a kingfisher bird coming out of water with fish in its mouth, while the ripple effect of the water was seen scattering all of over the photo and adding more beauty touch to the picture. The beautiful picture was captured by Nick Dale at South Georgia; the picture shows two emperor penguins standing together and stirring at stone on the beach.