Chewy the wonder dog has a huge fan base now – his neighbor Stacey Bass. Chewy and his owner, 11-year-old David Galvez, were at home one day hanging out; Stacey was gone.

Chewy is like any other dog and will alert his humans to an intruder, the garbage guy, a squirrel and any other perceived threat. But David thought his dog was crazy when he began scratching at the front door, begging to be let outside.

David figured his loyal best friend just wanted to go outside for a walk. But he was acting a bit off and more frantic.

He quickly realized that something actually was wrong. So he got up and escorted Chewy down the steps of their Sacramento complex and outside.

when they made it down the front steps and looked around outside, David was shocked at what he found.“There’s a lot of white smoke clouding around. I just thought it kind of seemed suspicious.”

David alerted his mom Christine Soto to the situation and she called 911 for help. The fire swept through Stacey’s home, consuming it from top to bottom.

Then they phoned Stacey and delivered the devastating news.“Miss Stacey, Miss Stacey – your house is on fire! And I was like really, no. You’re playing with me.”

The neighbors weren’t sure if Stacey was home or not at the time, so naturally, they were beyond relieved when they learned she wasn’t home at the time the fire broke out. The outcome would’ve been much, much worse.

The Sacramento Metropolitan Fire District responded to the fire. They later commended David and Chewy for being aware of the dangerous situation unfolded next door.

They even invited David to join their ranks and become a firefighter with them.The fire burned Stacey’s car, garage and torched several precious family heirlooms. But she noted that “they can be replaced.”“I’m so thankful for David.”

In fact, the U.S. Fire Administration, a branch of FEMA, trains dogs to detect ignitable liquid accelerants used to start fires. The canines are given a command such as “seek” and they will sniff out the odor of an accelerant. It’s incredible to see! 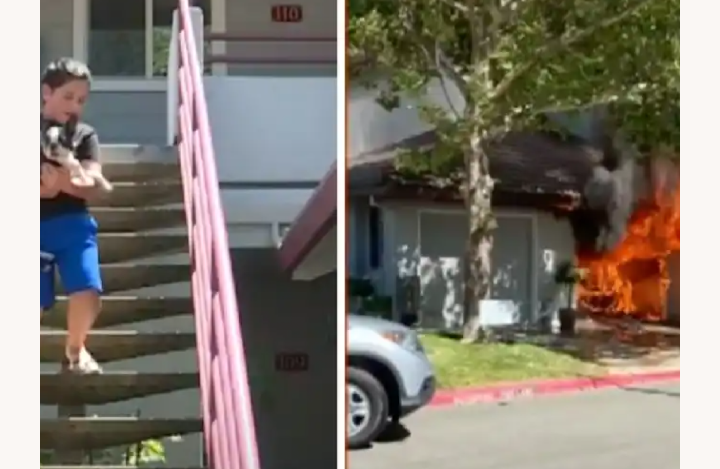 Not only are dogs’ noses up to 100 million times more sensitive than a human’s nose, but they also can sense weak thermal radiation, which is the body heat of mammalian prey, according to one study. Marc Bekoff, an ethologist and expert on canine sniffing, described it as a “fascinating discovery.”

“[It] provides yet another window into the sensory worlds of dogs’ highly evolved cold noses.”

Stacey expressed gratitude toward David and Chewy, because if Chewy hadn’t sniffed out the fire and David hadn’t responded so swiftly, the damage would’ve been even more devastating.“Your worst nightmare come true. You never expect it will happen to you.”