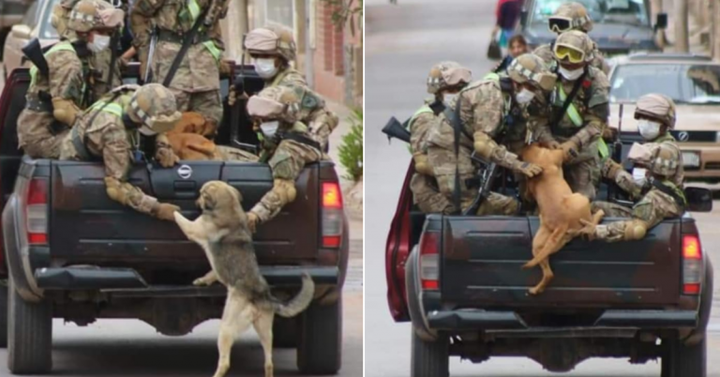 One of the measures taken by countries affected by pandemic is deporting the army on streets to ensure the public is adhering to the movement restriction rules implemented by the government.

Similarly, the country of Bolivia has also assigned their soldiers patrol duty around neighborhoods. Dressed in their camouflage uniforms, masked and armed, they roam the mostly empty streets in four wheelers keeping check on the civilians and their safety.

On another day of patrolling the roads, a team of Bolivian soldiers encountered something unexpected. While their vehicle was passing by a rather quiet road in Tupiza, they noticed two dogs running after them.

They stopped midway to see what would happen next, and the dogs proceeded to attempt to jump into the vehicle with them. Poor thing, they were probably starving and lonely.

Moved by their gesture, the soldiers helped the animals get into the truck.

This genuine moment was caught on camera and posted on Facebook, which then became the talk of the internet town.

Netizens did not hesitate to praise the military for their concern over the street dogs.

A follow-up image shows how comfortable the dogs have gotten with the soldiers as they were seen sleeping together peacefully.

The two dogs are now proud members of the Bolivian army.

Street animals are particularly having a hard time surviving during the pandemic because there’s no one to feed them or give them shelter. With limited food and no place to go, most of them die of starvation.

If it’s within your means, try to help these animals out by leaving them food and drink whenever you can. It might make no difference for you, but for the, it’s everything.