By footballmaster (self meida writer) | 1 months

A video footage from the surveillance camera of a neighbor has captured the moment two dognappers arrive in a car and shoot Lady Gaga's dog walker before stealing her two French bulldogs on Wednesday night. Ryan Fischer was shot outside his home on West Hollywood's Sierra Bonita Avenue as he walked Gaga's three dogs Koji, Miss Asia, and Gustav just before 10pm yesterday.

The video shows Fischer repeatedly yelling for help as he tries to fight off the suspects. The struggle escalated before one suspect takes out a semiautomatic handgun and shoots the dog walker. LAPD Public Information Officer Tony Im said on Thursday evening that the victim is now in stable condition after previously being listed as critical. 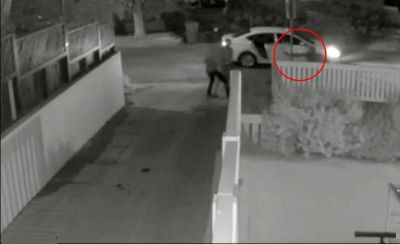 The surveillance camera footage, obtained by TMZ, captures the moment dog walker is strolling with the dogs around 9:40 pm on Wednesday when a white, four-door sedan pulls up alongside him. Two men can be seen getting down from the backseat.

One of the suspects can be seen cocking a pistol as they storm toward the 30-year-old dog walker. "Give it up!" yelled one of two men at Fischer. Not much can be heard after that as a struggle soon stars after Fischer refuses to let go the dogs and the attackers can be seen on the ground.

CCTV shows moment Lady Gagaâ€™s dogs were taken & her dog walker was shot. â€œThe neighbour only agreed to release this video after getting word from Gaga that she & her team wanted it to be seen to catch the shooter and recover her dogs, Koji and Gustav.â€œ  pic.twitter.com/z1LwUcLrx2

Fisher is next heard shrieking "no" and calling out for help as he attempts to protect the bulldogs from the attackers. He looks paranoid and helpless, when attacker pulls out a semiautomatic handgun and shoots Fisher in the chest. A single gunshot can be heard, with Fishner screaming in pain. The attackers then pile into the back of the sedan with Koji and Gustav.

Miss Asia, luckily, manages to escape from the dognappers and is seen in the video running back over to Fischer who is lying on the ground and bleeding.

Lady Gaga's dogwalker Ryan has been shot in the chest 4 times whilst walking her dogs.

The attacker then fled with 2 of the dogs, Koji and Gustav, while Miss Asia managed to get away

I'm hoping and praying that Ryan makes a speedy recovery and the dogs are returned safely! ðŸ™  pic.twitter.com/ZWTfyhMrOP

Fischer is hear screaming in the video after the attackers leave with the two dogs. "Oh my God, help me!" he screamed. "Help me, I've been shot! ... I'm bleeding out of my chest!" he can be heard yelling. LAPD initially didn't reveal the dog walker's name but later identified him as Fischer who was shot in the chest but is expected to survive. Authorities said he was conscious and communicative when they arrived on scene.

Officers described one of the suspects as a male, dressed in a black hat and black hooded sweatshirt. The second suspect's gender is 'unknown', police say, but was also wearing black clothes. Police is still investigating the incident and no arrests have been made so far, which has prompted Gaga to offer a $500,000 reward for the return of Gustav and Koji.

According to TMZ, the neighbor agreed to release the footage only after receiving word from Gaga's team that she wanted the video to be widely shared to help catch the robbers. The LAPD hasn't yet commented if Wednesday's attack was targeted. Other thefts of French bulldogs have been reported in Los Angeles in recent times.

Fischer, who runs a social media account called Valley Of The Dogs, had been watching Gaga's French bulldogs while she's away filming a new Ridley Scott movie in Italy.

Out Of The 12 Guns That Were Collected From The Slain Soldiers In Benue, See The Number Recovered

Is It By Emptying Our Villages That You Arrest IPOB & ESN? -Imo Resident Says As Army Raids Villages

Today's Headlines: Orji Kalu Breaks Silence On Attacks In Abia, Gani Adams Says He Is In Full Support Of Self-Determination