When you cast a net out into the open sea, you never quite know what you're going to pull up. Deep sea fisherman Garry Goodyear has seen his share of odd creatures in his line of work, like fish with translucent skin to slimy alien-like critters with bulging eyes. Nothing really phased him anymore — until one day recently at Bonavista Bay, Newfoundland. Even Garry couldn't help but gasp when he reeled in a monstrous surprise...

"No, I haven't seen nothing like that. To tell you the truth, I don't want to see much more!" Garry said of the creature he reeled in that day. Garry didn't cast out his net in hopes of finding something extraordinary, however. In fact, it all started as a perfectly normal day.

Garry found his monster from the deep when he was fishing in Bonavista Bay for turbot, a flatfish that can reach up to 30 pounds. His crew dropped his nets to 460 fathoms (2624 feet), watched the nets disappear beneath the surface, and waited for them to fill.

That afternoon, his crew raised the nets from deep in the bay and found something...unexpected. "We're hauling away, and by and by, I seen this coming around the roller. I said, 'Good God! What in the heck was that?'" Garry said. "I've never seen nothing like that before!"

Along with the rest of their catch, there was a strange fish that was almost three feet long. Garry picked up the sea creature and examined it. At first, he "thought it was a platypus, because he had that big snout on it," he said.

"It looked like he had wings, and his nose was, it was almost like rubber,” Garry said. “I guess it was like cartilage." No one else on the boat was sure what they’d accidentally caught in their net. Garry’s curiosity wasn’t satiated.

Fishermen are curious by nature — after all, you never know what you'll find in the bottom of your net every day — and since the ocean is literally crawling with bizarre deep sea critters, Garry was determined to identify what he'd caught. He knew he needed an expert's opinion.

He needed to know what this thing was. "I brought it into the fish plant, to the wharf where we offloaded, and nobody in there knew — haven't seen it before," Garry said. Next, he posted a picture on his Facebook profile, asking the internet for help.

Of course, everyone loves a good fish mystery, right? With the entire internet at his fingertips, not to mention interested people who heard his story, it was only a matter of time before the fish was identified. The strange nose, the "wings," the rubbery skin — it all made much more sense than Garry thought.

"I found out that it was a long-nosed chimaera," he said. But learning the name of the weird-looking fish didn't exactly clear anything up. He'd never heard of a chimaera before, and definitely never expected one to wind up in his net. Thankfully, marine biologist Carolyn Miri was there to help.

“They're really fascinating,” Miri said, and she wasn't wrong: These deep-sea dwellers are related to sharks and stingray-like fish called skates. In a way, chimaeras are the perfect combination of the scariest qualities of each fish, and their appearance isn’t the only unique thing about them.

"[They] actually are cartilaginous fish. So, all of it is made of cartilage — like the bridge of your nose," Carolyn said. "It doesn't have a skeleton made of bone, like we do." If this kind of creature sounds alien-like, that's because it kind of is. How this guy made his way to Newfoundland is a mystery... 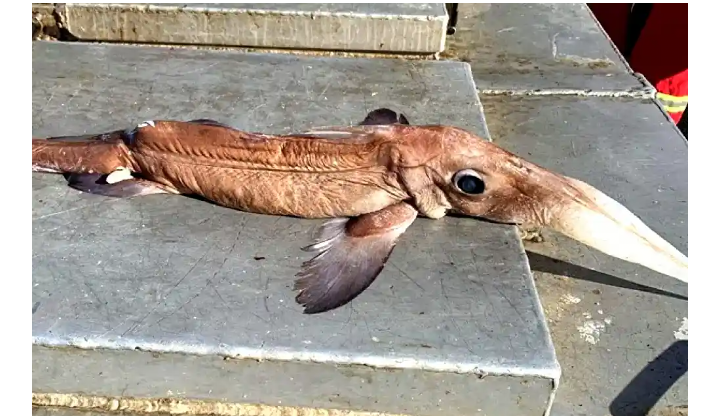 Chimaeras live 650 to more than 3,000 feet below the surface of the ocean. They’ve been discovered at depths of nearly 10,000 feet, too. "Because of their deep-water habitats … we actually don't know very much about their biology, their life history and their behavior," Carolyn said. What we do know about chimaeras comes from a most unlikely source.

"Chimeras" are actually mythical figures. A fire-breathing monster comprised of several species of animals, most illustrations of a mythical chimera show a creature the looks like a lion with a goat head sticking out of its back and with a snake for a tail. So how did the not-mythical chimaera get its name?

Well, take a look at this chimaera. Pretty creepy, right? A chimera from mythology is a combination of different animals, and so, too, is a real-life chimaera. The long-nose chimaera fish is aptly named because it “does appear to be some sort of a cross between a bird and a dinosaur,” Carolyn said.

"It has a long, pointy snout. Its green eyes are bright neon," she added. The eyes, according to Miri, are what gives this creature the monstrous "chimera" effect, hence the name. Though chimaeras are pretty mysterious creatures for scientists, they do know a little about how its monstrous make-up works.

Like other cartilaginous creatures, chimaeras use tooth plates to crush crabs, shrimp, and other hard-shelled creatures living their lives on the ocean floor. Remember how chimaeras are related to sharks and sting-ray skates? Well, they also inherited some of their scariest qualities.

In adulthood, long-nosed chimaeras can grow four-and-a-half-feet and are known for having strong, venomous spines. "We didn't know it had a spine with venom in it. It was just another fish to us ... and we were handling that with bare hands!" Garry exclaimed.

Luckily for Garry and the rest of his crew, the fish died when they were reeling the net out of the water. "With the water pressure change, when a harvester is retrieving his or her gear, that often causes lots of deep-water animals to die on the way up to the surface of the ocean," Carolyn said.

If the fish was still alive on the boat, the fishermen could have been hurt. "It does have a long, sharp spine … and that could inflict a bad injury if the animal was alive and flailing, thrashing about," Carolyn said. You shouldn't let your guard down the next time you encounter a dead chimaera, however.

"Even with a dead animal, people need to be super-careful, because of that long spine,” Carolyn said. “It's very sharp." You know an animal is dangerous when it can still hurt you after it’s dead.

Buhari to Bandits: My administration will not tolerate your continuous attacks on poor citizens

"Is This What Nigeria Police Have Been Reduced To"-- Uchemadu Drags Kiddwaya For Having Escort.

Dear Guys, Don't Ever Tell A Lady These 3 Secrets Of Your Life No Matter The Love

DJ Cuppy Begs Fans To Listen To Her Album And Give Her Feedback: See The Feedbacks Her Fans Gave

My Experience As A News Hub Creator

Who Looks More Ageless Between This Black American Actress Who Is 53 & Genevieve Who Is 41? (Photos)