In the grand scale of the universe, our planet really isn't that big. You would think that all the creatures on our little rock would have been discovered by now, but it seems like new faces are popping up all the time... and they're debuting in the strangest places.

Fisherman Stewart Fraser was reeling in his lines off the coast of New Zealand when he realized that he had caught something very unusual. "I was in two minds whether to haul it in," he later said. "But curiosity got the better of me." We're certainly glad he did, because what he discovered is stranger than anything you can imagine.

Stewart Fraser was fishing off the coast of New Zealand when he pulled in something very unusual. 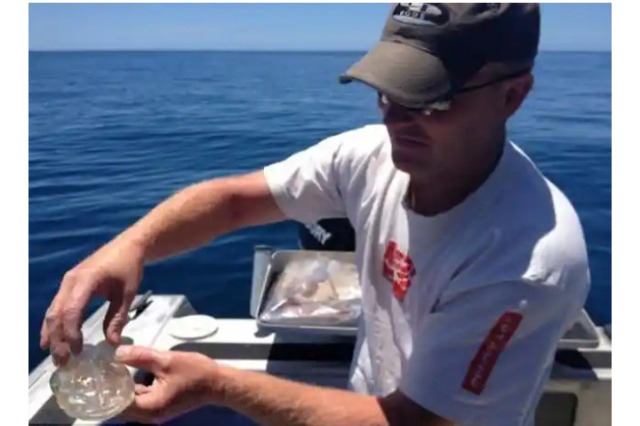 It was a creature unlike anything he had ever seen in the ocean.

"It felt scaly and was quite firm, almost jelly like," he said. "You couldn't see anything inside aside from this orange little blob."

As it turns out, this creature isn't the agent of an alien invasion. It's actually known as a salp.

A salp is a planktonic tunicate, an invertebrate that moves through the ocean by funneling water through its jelly-like body.

Though they look like something you would expect to find at the ocean's darkest depths, they actually prefer the upper equatorial reaches, where they can be close to the warmth of the sun, feeding on phytoplankton and other bits of organic detritus.

Their translucent body is believed to be a form of defensive camouflage. While they are quite apparent to us, they are much harder for hungry sea creatures to spot.

But the most fascinating thing about them is their unique life cycle. Salps cling together to form long chains.

As one massive, aggregate organism, they move, feed, mate, and grow as one.

18 Upcoming Action Films Of 2021 And Their Release Date

EPL: Bad News For Arsenal As Two Stars Are Out Of Everton's Clash

Photos Of Zubby Michael With Davido, Regina Daniels, And Others

10 Romantic Names You Can Call Your Lover

Emmanuella Starred in An Australian Movie, Survive or Die.