See How the Independence Gift Given to Nigeria by britain looks like now.

By rasheedoladapo (self media writer) | 1 year ago

JUST LIKE THE STATUE OF LIBRARY WAS GIVEN TO THE UNITED STATES OF AMERICA UPON INDEPENDENCE NIGERIA ALSO GOT A GIFT FROM THE BRITISH GOVERNMENT.

The building is built of reinforced concrete, the building has housed major corporations and also the Defense headquarters under the

Babangida administration and was which was commonly referred to as Defense House. In 1993, portions of it caught fire and since the incident, the building has not been managed properly.

The building which is located west of the Tafawa Balewa square onikan lagos is a 25 floor building standing tall at 338ft, it remains one of Nigerians tallest buildings

It was constructed by G.cappa and completed in 1961,just after Independence

It is sad to note that today this building has been completely abandoned by the federal government it is now in a detoriorated state being used mainly for musical vedieos.

Some of the popular videos that have been shot there include Fada fada by phyno,Case by teni and many more. 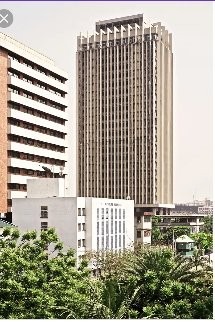