Remember the mysterious Battle in Los Angeles 1942:here is the true story.

The battle of Los Angeles.

During the months after harbor pear,america was on edge especially California,On the year 1942 February 23,a Japanese submarine had fired an oilfield near Santa Barbara.The next day,the naval officers said that enemy attack was imminent.The next day radar detected an unidentified aircraft heading towards Los Angeles,the city was turned into a battle field. 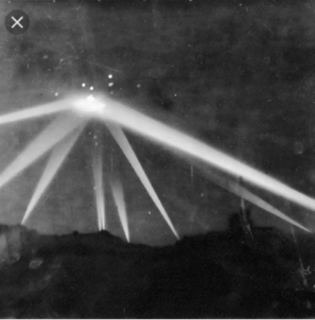 After which the object had appeared on screen,the officials ordered a city wide black out,because there was no moon that night, los Angeles was in darkness.The cities anti air craft batteries were already readied for action, then some one sighted a red balloon carrying a red flare,then suddenly,the night sky turned into a terrifying light show.The military fired an approximation of over 1,400 rounds into the air.The soldiers spotted all types of planes traveling in a varying speed and at widely different attitudes.

When the smoke had cleared,they couldn't find any sign of invasion and the Navy declared that the incident was due to jitters.The army wasn't really sure mentioning the possibility of enemy aircrafanBut the question is where had they come from and where did they go.they did not know.This conflicting reports brought many criticisms from the government and many news papers.Things got really bad since few citizens had died due to heart attacks,traffic accident and had also caused property damage.

What really happened that night, some say it was the red balloon that drifted over loss Angeles and the soldiers mistook it as Japanese planes the sky was also dark and also full of smoke.Other conspiracy theorist think Aliens were involved.