Ondo 2020: See the leading aspirants, Who among them do you think 'll emerge as the next Governor???

By Larrykay20 (self meida writer) | 8 months

Since 2012, the Ondo State Governorship Election has always been a battle of three major contenders. That time, it was between the incumbent Governor Olusegun Mimiko of the Labour Party (LP), Chief Olusola Oke of the People's Democratic Party and Rotimi Akeredolu (SAN) of the defunct Action Congress of Nigeria (ACN), Mimiko defeated two other candidates in the keenly contested election. In 2016, it was a direct contest between Eyitayo Jegede (SAN) of the People's Democratic Party (PDP), Rotimi Akeredolu (SAN) of the ruling All Progressives Congress and Chief Olusola Oke of the Alliance for Democracy in which Akeredolu won. Again, History repeated itself as the incumbent Governor Rotimi Akeredolu (SAN) defeated 11 other aspirants to clinch the APC Governorship ticket, while PDP Governorship Candidate in the 2016 Gubernatorial Election, Eyitayo Jegede (SAN) retained the PDP Guber ticket, In the same vein, Akeredolu's embattled Deputy is the Governorship Candidate of the Former Governor Olusegun Mimiko backed Zenith Labour Party (ZLP). Akeredolu, an Owo-born Lawyer and Senior Advocate of Nigeria is the incumbent Governor of the Sunshine State, The 64 year-old Politician is making a last minute efforts to win his re-election bid. A former President of the Nigerian Bar Association (NBA), It 'll be recalled that Akeredolu's emergence as the ruling party's Governorship Candidate in a controversial primary election in 2016 torn the party apart in which aggrieved members and party chieftains formed a parallel group known as the "Unity Forum". After his emergence in 2016, Akeredolu allegedly marginalized his key supporters who worked tirelessly for his Election as Governor. He added more salt to his injury when he supported the Candidates of the Action Alliance (AA) for the 2019 National Assembly Elections, a development which affected the chances ruling All Progressives Congress (APC) in the 2019 Presidential and National Assembly Elections in Ondo State, the ruling party performed woefully. Despite massive opposition from the Unity Forum, At the party's Governorship Primary held recently, Akeredolu scaled through the hurdle to secure the Governorship ticket of the party for the 2020 Governorship Election. Some are of the opinion that the resignation of his embattled Deputy, Agboola Ajayi and the immediate past Secretary to State Government (SSG) among other reasons might affect his second term bid, while others insisted that he 'll coast home to victory. The Akure-born Senior Advocate of Nigeria (SAN) is a well-known political figure in the State, Jegede who is widely acknowledged as an Intelligent and Charismatic Legal Practioner, Political Stalwart was the State Attorney General and Commissioner for Justice in the Administration of Former Governor of the State, Dr. Olusegun Mimiko between 2009 and 2016, triggered by his impressive performance as Commissioner, Mimiko anointed Jegede to succeed him as Governor, but the Gentleman lost the election to the incumbent Governor Rotimi Akeredolu (SAN) of the All Progressives Congress. It is widely believed that Jegede's chances in the 2016 Governorship poll was terminated due to the internal crisis that rocked the People's Democratic Party (PDP) both at the National and State levels. In the recently conducted primary election, the 59 year-old Governorship hopeful defeated 7 other aspirants including the incumbent Deputy Governor, Agboola Ajayi who crossed over from the All Progressives Congress to clinch the party's ticket. A grassroot politician, Jegede is leaving no stone unturned to emerge as the next Governor of the State. Recently, Governor Seyi Makinde of Oyo State had visited Jegede's former boss, Dr. Olusegun Mimiko (now a Chieftain of the Zenith Labour Party) to pacify him to support Jegede ahead of the October 10 Governorship election in the State. Undoubtedly, with the clamour for an Akure indigene to become the next Governor of the State, Jegede remain a force to reckon with. Following a meeting between his political associates and that of Dr. Olusegun Mimiko, Ajayi subsequently defected to the Zenith Labour Party (ZLP) with the resolution that he 'll be the Flagbearer of the Party in the October 10 Governorship poll. 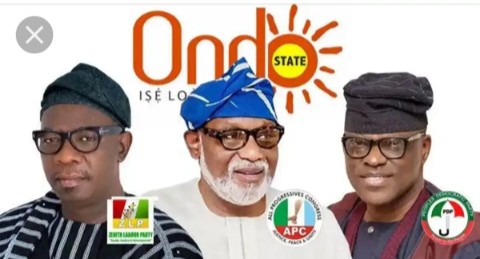 Who among these major contenders do you think stands the brightest chance of emerging as the next Governor of the State???

How Many Types Of Watermelon Do You Know? See Different Types Here

Before You Troll Ronaldo Because His Team Is No More In UCL, Remember He Still Holds These Records