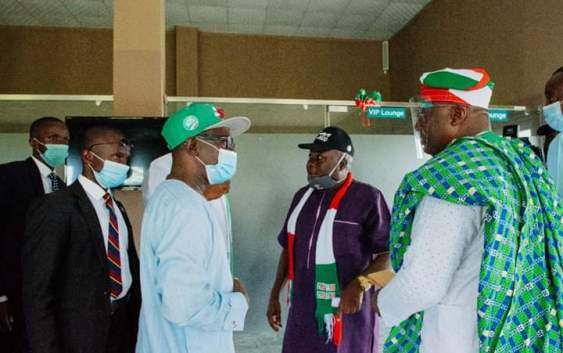 All is now set for the Ondo State 2020 Government Primary to elect the People's Democratic Party (PDP) nominee for the October 10, 2020 state election.

On the basis of reports that the indirect primary is planned for the Dome, Igbatoro Akure Road, the same location used by the APC to choose Governor Oluwarotimi Akeredolu as its candidate.

Other candidates include: Dr Bode Ayorinde, Banji Okunomo, Godday Erewa, Barr Sola Ebiseni and Senator Boluwaji Kunlere. The National Working Committee (NWC) was reportedly unable to ensure the emergence of a consensus candidate between the seven candidates for governorship in Ondo State before the PDP was elected governor for the October 10 governorship election.

It was learned that at a meeting yesterday chaired by the National President of the PDP, Prince Uche Secondus, none of the party's presidential candidates decided to step down in favor of a consensus candidate.

The meeting began around 12:00 p.m., but ended at approximately 8:00 p.m. It was concluded that since the meeting did not achieve its goal of getting the candidates to step down, the PDP NWC promised to hold a free, fair and transparent election in which all the delegates would be given a free hand to choose and vote a candidate of their choice.

The meeting also harmonised the contentious three-man ad hoc delegation. The list of delegation was the subject of controversy until it was harmonized. All the candidates for governorship have signed a Memorandum of Understanding (MOU) to support any nominee who emerges from the gubernatorial primary election.

The governor of the state of Enugu, Hon., is the president of the governorship of the primary election. Ifeanyi Ugwuanyi will be supported by Mr. Ahmed Fintiri, Governor of the State of Adamawa, for election. Certain members of the committee;

The committee is mandated to hold the primary election to elect our party's flag bearer in Ondo State for the upcoming 2020 governorship election in the state.

The Campaign Organization of the Deputy Governor of Ondo State; Hon Agboola Ajayi warned against disparaging remarks made against any of the candidates of the People's Democratic Party (PDP).

The Director General of the Campaign Organization, Dr. Kola Ademujimi, said that the aim of all the candidates of the PDP is to dislodge the ruling All Progressives Congress ( APC) and not to fight each other.

Ademujimi said the comments about Ajayi being a new member of the PDP were incorrect, in a press statement titled "We can't thank our staunch supporters and high-profile parties enough"

Ademujimi said that the Deputy Governor's Campaign organization would uphold the principles of democracy before, during and after the party's primaries set for Wednesday and the general election set for October 10.

According to him, the political culture of deference and focus has been a hallmark of the Ajayi Campaign Organization since the beginning of the campaign to convince a committed and patriotic party.

Ademujimi said, "From 1998 when he joined the PDP, until 2016 when political demands drove him out of the party, he acted as a bridge builder and a conscious networker in and out of the party and politics. "His modesty, his extraordinary kindness and kindness, his evident political ability and his compelling show of professional sportsmanship have made him widely known.

“We are grateful for this unique show of love and confidence that we at the Alfred Agboola Ajayi Campaign Organization (3ACO) have enjoyed across the 18 LGAs during our statewide tour, and we assure you that we will never take it for granted.

"The 3ACO is proud of the tireless and creative strategies with which we have presented our aspirant as a competent grassroots politician who has risen to the ranks.“His legislative experience as a former member of the House of Representatives added to his widely accepted political curriculum vitae of more than three decades among our party members.

"Our campaign issues were simply about positioning our party as a formidable, organized and victorious political platform for the sustainable development of party men and women, as well as non-partisan masses, technocrats and non-partisan masses.

Ademujimi appreciated the members of the Campaign Organization and the well-wishers within the PDP for overcoming the temptation to disdain other contestants in spite of provocations and all odds.

His words, "As an organisation, we have purposely refrained from insulting any gubernatorial candidate, not because of lack of what to do, but because of our conviction that only one person will emerge as a candidate for governor after the upcoming primary elections on Wednesday, 22 July 2020 and that such insults and invectives will be irrevocable to the detriment of the chances of our party in the elections.

“Our mutual political experience and maturity have shown that it is still the duty of all of us, as dedicated party leaders, to campaign, after the primary elections, for the duly elected candidate of our beloved party to win the October governorship election in Ondo State.

“They also want to thank our elder statesmen and women who have declined to join the regular name-callers and mudslingers in taking sticks and stones against our enchanting aspirant and his campaign organizers.

Ademujimi urged the members to pray and work together for a rancor-free, genuinely democratic, quite open, obviously fair and generally credible process, so that whoever gets the baton to run the PDP governorship race, by winning the October 2020 governorship election in Ondo state, would certainly push out the current Occupiers of the Government House.