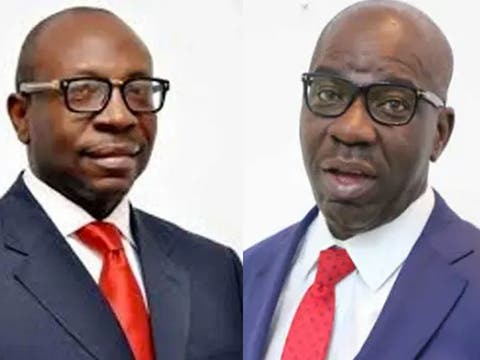 As the Edo State governorship election approaches, more stakeholders are giving their views on where the pendulum will swing bwteeen Governor Godwin Obaseki of the Peoples Democratic Party, PDP and his All Progressives Congress counterpart, Pastor Osagie Ize-Iyamu's.

One of those stakeholders weighing in on the Edo 2020 governorship election is a former rival for the sole governorship ticket of the PDP, Barrister Kenneth Imansuangbon, who said that Governor Obaseki would floor the APC and its candidate, Ize-Iyamu in all 18 local government areas of the state.

Recall that Imasuagbon, Gideon Ikhine and Omoregie Ogbeide-Ihama were the aspirants contesting to be the flag bearer of the PDP, until Governor Obaseki defected into the PDP and got the endorsement of the National leadership of the party, which eventually led to the withdrawal of the trio from the race.

He said, “Edo people have wholeheartedly decided to follow Governor Godwin Obaseki anywhere he goes and there`s absolutely nothing the opposition All Progressives Congress and its candidate can do about it”. The Esan born politician noted that the people have decided to give their mandate to the governor to run till 2024.

The election is about Edo people and they know who means well for them among all the political parties and their candidates jostling to be governor of the state, they know the capacity of Governor Obaseki , they trust him and they have decided to move on with him to continue with his good works till 2024”.

"You can take it from me, Governor Obaseki will win in all the 18 local government in Edo state and it will be an overwhelming victory, it is what our people want, they want continuity and there is nothing anyone can do about it, especially now that the All Progressives Congress is currently in very bad shape across the country”, he said.

The election which has been billed as a two horse - race between Governor Obaseki and Ize-Iyamu comes up on September 19th.