By TLucky (self media writer) | 8 months ago 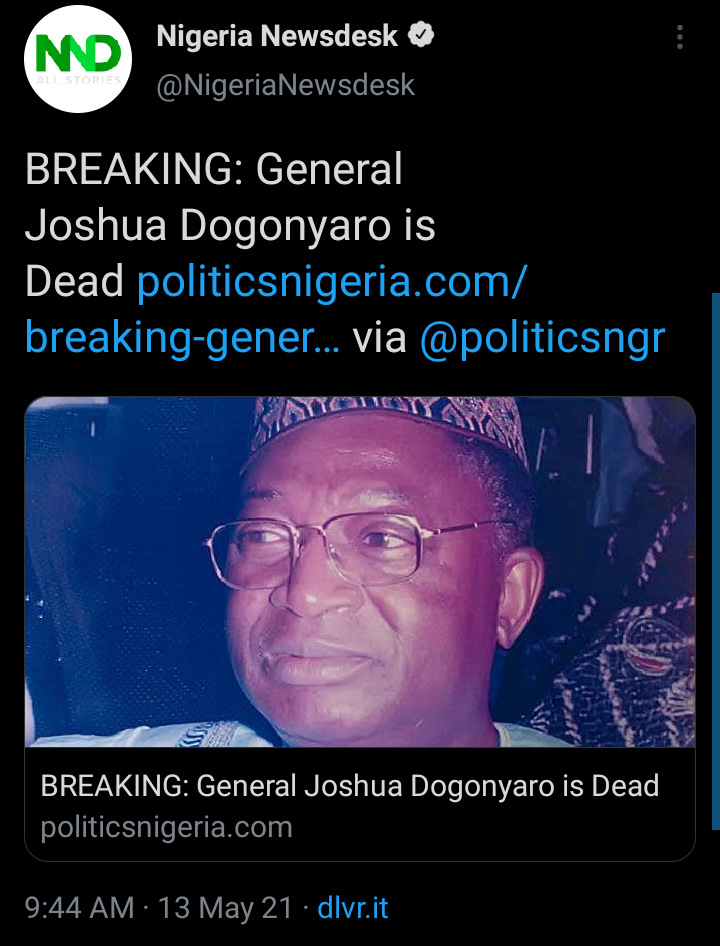 Dogonyaro, a Former Field Commander of ECOMOG, died in Jos on Thursday morning according to family sources.

The retired general was popular for being a member of the "langtang Mafia" during his days in the military. He was also responsible for announcing the coup that removed current President, Muhammadu Buhari from power in 1985. 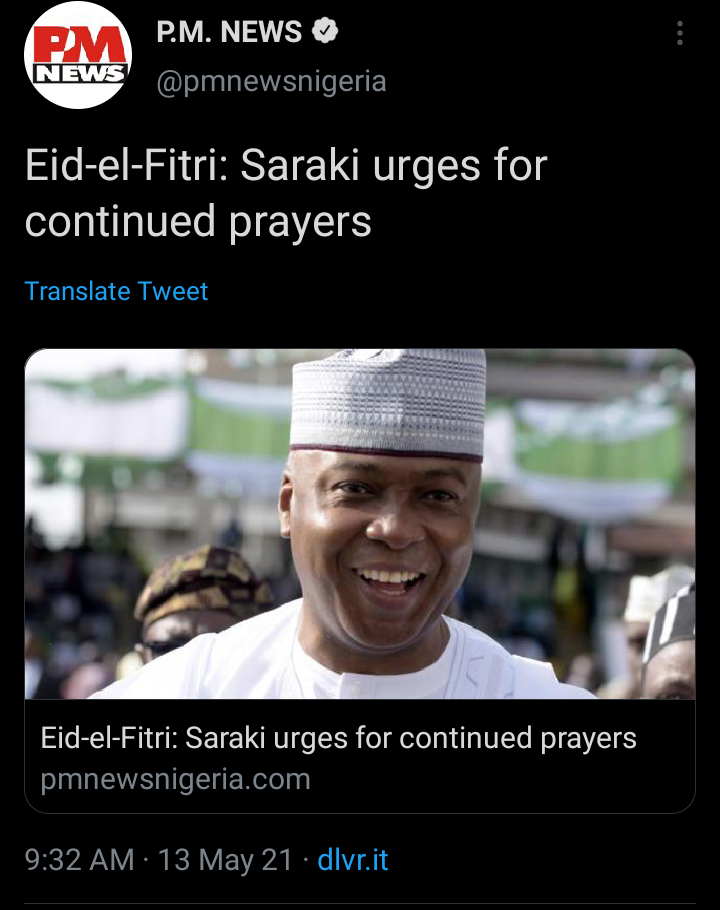 Recently, Former Senate President, Dr Bukola Saraki, urged Nigerians to continue to pray and play their roles to ensure peace and unity in the nation.

Saraki made the call on Thursday in his Eid-il-Filtri message, where he congratulated all Muslims in Nigeria and all over the world for successfully completing this year’s Ramadan fast.

Saraki also went further to celebrate those that are on the frontlines to keep Nigeria safe. 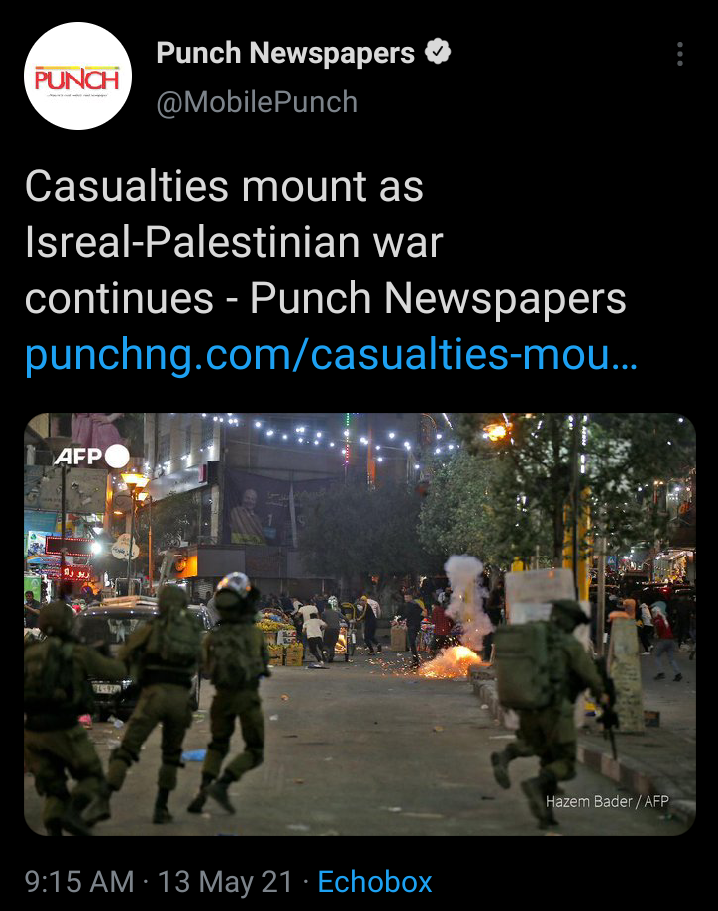 The longstanding war between Isreal and Palestine has resuscitated since Tuesday night with Israeli airstrikes targeting Hamas offices in Gaza City and militants in Gaza firing rockets at the metropolis of Tel Aviv, the southern city of Ashkelon and Israel’s main airport.

New York Times reports that at least 35 Palestinians, including 10 children, had been killed in Gaza, with 203 others wounded. Israeli medical officials said five people were killed in strikes on Tel Aviv, Ashkelon and Lod, and at least 100 were wounded.

The enmity has been long-standing across Arab neighborhoods as Palestinian citizens of Israel expressed fury at the killings in Gaza and longstanding complaints of discrimination inside Israel itself.

For more than a century, Jews and Arabs have struggled to be the masters of the land between the River Jordan and the Mediterranean Sea. Israel has inflicted a series of crushing defeats on the Palestinians since it became independent in 1948, but it still cannot win. 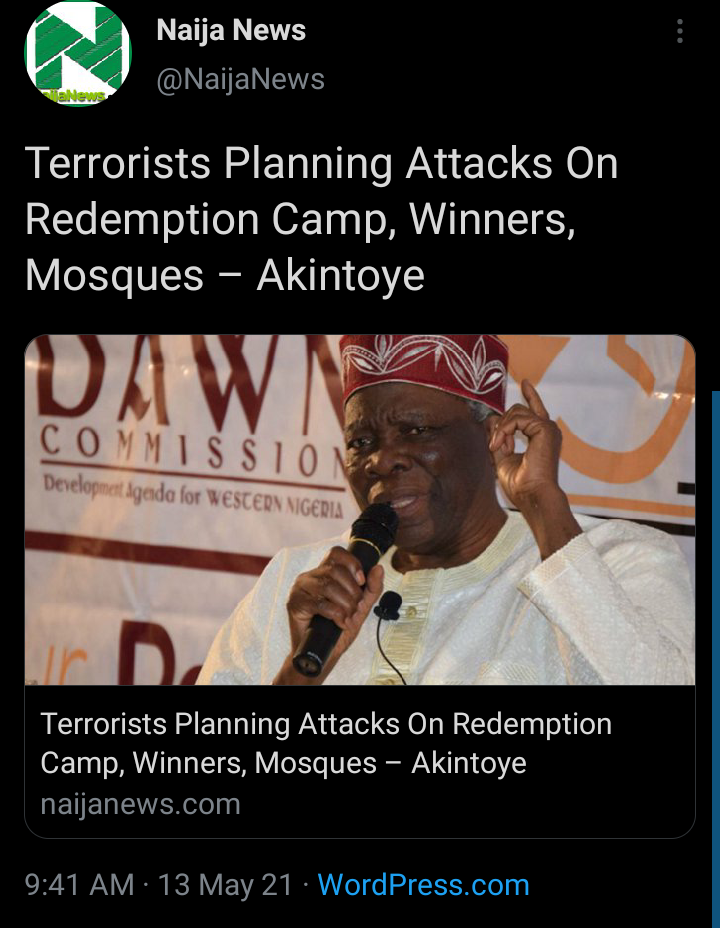 The leader of Ilana Omo Oodua, in a letter forwarded to the governors, noted that the terrorists are ready to strike any moment from now.

Prof Akintoye disclosed this in a statement released on Wednesday through his media aide, Maxwell Adeleye.

He further stated that the hoodlums have plans to attack important places to wreck the region’s economy.

Akintoye also warned that General Overseer of the Redeemed Christian Church of God, Pastor Enoch Adeboye; Bishop David Oyedepo of Winners’ Chapel; and other church and Islamic leaders to protect their churches and mosques from being attacked.