By DropNews (self media writer) | 2 years ago 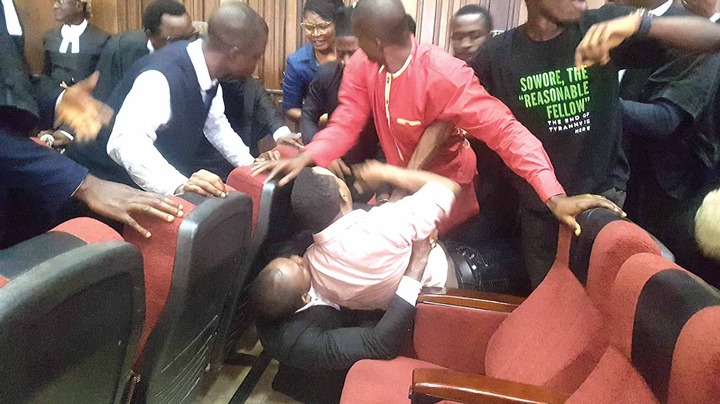 The reason for the re-arrest of convener of RevolutionNow protest was given by Nigerian government on Sunday while reacting to the re-arrest of Sahara Reporters publisher Omoyele Sowore by the Department of State Services.

The Presidency in a statement said Sowore “is a person of interest to the DSS” because he called for “a revolution to overthrow the democratically elected government of Nigeria.”

“He did so on television, and from a privileged position as the owner of a widely read digital newspaper run from the United States of America,” the government said in a statement shared on social media.

The Nigerian government reactions came days after Sowore was dramatically re-arrested just hours after being freed on bail by a federal court. There are media claims that Sowore was re-arrested in the court on Friday but the DSS said the re-arrest was effected outside the courtroom.

Sowore's lawyer Femi Falana told AFP on Friday that his client escaped being picked up by DSS on the court premises. He said he “personally drove him” to DSS office on Friday “to avoid violence”.

Nigeria’s intelligence agency has held Sowore since his arrest on August 3 — despite two court orders granting him bail. The journalist was released briefly on Thursday after a federal court gave the intelligence agency a 24-hour ultimatum to release Sowore pending his trial.

The incident of the controversial re-arrest of Sowore has added to growing concerns about Nigeria’s democracy and press freedom which critics say is under pressure.

A US Senator, Bob Menendez, from New Jersey where Sowore’s family is based, described his rearrest as a “blatant miscarriage of justice [which] is symptomatic of closing political and media space in Nigeria.” Menendez said he will be working with the US Ambassador to Nigeria to secure Sowore’s release.

Nigerian government described Sowore’s call for revolution as an “armed revolution” which is “not normal amongst ‘human rights activists.”

“Nigerians do not need another spate of lawlessness and loss of lives all in the name of ‘revolution’, especially not one that is orchestrated by a man who makes his home in far away New York,” it added.

Content created and supplied by: DropNews (via Opera News )