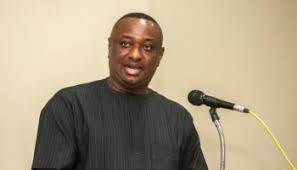 The Awareness for Good Leadership, Peace and Development has warned politicians against hijacking the 774,000 jobs under the Special Public Works Programme (SPW) of the Federal Government.

The National President of the group, Comrade Abdullahi Aliyu Katsina, told our correspondent in Kaduna that the project meant to end poverty among ordinary Nigerians should be fully implemented to benefit the poor.

Com. Katsina suggested that hunters and vigilantes should be recruited in the programme, especially in the North West, to tackle the security challenge facing the region.

He said, “The project was introduced by the Federal Government to tackle unemployment among youths, and if the politicians will produce names of hunters and vigilantes, it will be better, but recruiting only their political loyalists will be rejected by us.”

Ned Nwoko drags journalist to court, sues her for N2billion after she labelled him a cultist for marrying virgins. This is contained in a writ of summons obtained from Effurun High Court, Delta State on behalf of Nwoko by his counsel, Ikhide Ehighelua and Co dated July 13, 2020.

Also joined in the suit No. EHC 99 as the second defendant is Prince Chukwunonso Nwoko identified as the employer and sponsor of the first defendant, Jebose, a native of Onicha-Ugbo in Aniocha North Local Government Area of Delta State, resident in the United States of America.

According to the suit, both defendants made highly defamatory publications in several online blogs and other social media platforms “calculated to reduce the estimation of the claimant” and damage his reputation in the public.

It stated that the malicious publications had continued unabated against the plaintiff in spite of warnings by his solicitors to the defendants.

Counsel to Nwoko also stated that the first defendant defiantly came out openly on the social media that the cautions would not be a deterrent to his defamatory publications, prompting the legal action.

The claimant had also sought in his favour, before the court a “public apology to be published by the defendants in at least two national daily newspapers circulating in Nigeria and social media platforms” as well as an order of perpetual injunction restraining the defendants from making any further defamatory publications against him. Ahead of its primary election for the October 10 governorship election in Ondo State, the All Progressives Congress (APC) will today inaugurate two committees for the exercise.

The committees are to be inaugurated by the Chairman of the Caretaker Committee of the party, Gov. Mai Mala Buni of Yobe State. They are the primary election and appeal committees.

The Deputy National Publicity Secretary of the APC, Yekini Nabena, in a statement yesterday, said Gov. Yahaya Bello of Kogi State was the chairman of the party’s primary election committee, which consisted of nine members, with Olorogun O’tega Emerhor as secretary.

Also, the nine-member primary election appeal committee is to be headed by Emperor Chris Baywood Ibe with Arch. Abdulmimuni Okara as secretary.

The APC primary poll for Ondo State is slated for Monday. The leading opposition party in Sokoto State, the APC, has accused members of the Governor Aminu Waziri Tambuwal-led government of prioritising their political interest rather than the welfare of the people of the state.

Addressing newsmen, the state Chairman of the party, Isa Sadiq Achida, alleged that the PDP government had reneged on its promise to provide access roads to some communities in need of such facilities.

APC also chided the government over its handling of security situation in the state as a result of which, it said many people had been displaced.

Reacting, the Chairman of the ruling PDP in the state, Alhaji Ibrahim Milgoma, faulted the allegations, saying, “APC leaders should have been jailed by now because of the way they squandered public money when they were at the helm of affairs in the state.”

On the state of emergency on education, Milgoma said their government had achieved a lot in the provision of additional structures and teaching materials in schools across the state.