Today's Headlines: It Is Abuse Of Office Appointing Your Son As DG-PDP; Igbo youths give S/East Presidential aspirants 30 days to open campaign offices

It's abuse of office appointing your son as DG, PPMIU-PDP to Akeredolu 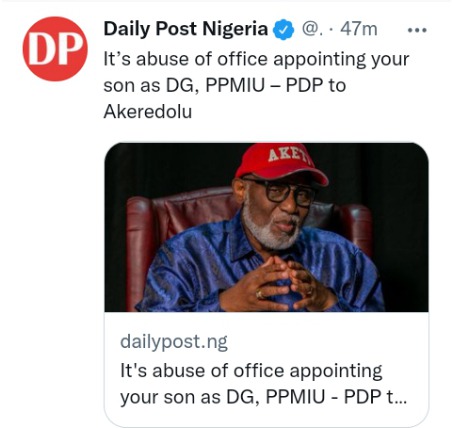 Following the appointment of Babajide Akeredolu as the Director-General of Performance and Project Implementation Monitoring Unit, PPMIU, by his father, Governor Oluwarotimi Akeredolu, the People’s Democratic Party, PDP, has lashed

out at the Ondo State Governor over the development.

While condemning the appointment, the state chapter of the party emphasised that the move signalled flagrant abuse of office on the part of the governor.

Akeredolu had on Tuesday announced Babajide’s appointment as well as the names of the 21 Commissioner-nominees and Special Advisers. 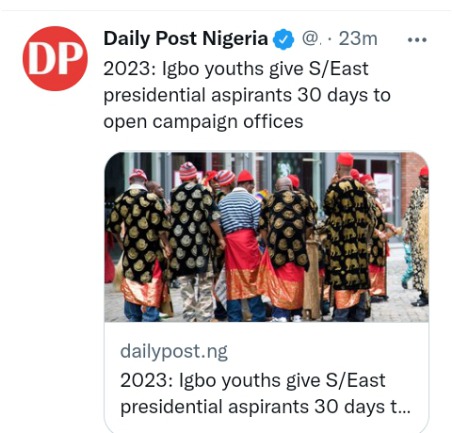 The youth wing of Ohanaeze Ndigbo Worldwide, Ohanaeze Youth Council (OYC), has issued a 30-day ultimatum to every presidential aspirant of southeast extraction in the 2023 general election to open their campaign offices in the region.

The council expressed regrets over the glaring absence of any presidential campaign office in the region, even as the political party’s primary election is barely 10 months away.

They urged all the potential candidates for the 2023 presidential election from the southeast to act like Zik and demonstrate their preparedness and zeal for the contest ahead thereby ensuring that their campaign offices are efficiently available and active. 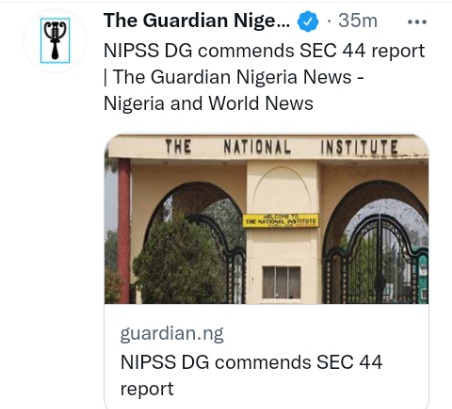 Acting Director-General, National Institute of Policy and Strategic Studies (NIPSS), Brig-Gen. Chukwuemeka Udaya, has noted that the 2021 participants did a wonderful work that if their report is implemented, it will help in turning things around for the country.

The participants, who worked on the theme, ‘Getting Things Done: Strategies for Policy and Programme Implementation in Nigeria’, registered for the course in February 2021 and undertook study tours to 14 states in Nigeria, five countries in Africa and six countries outside Africa.

The Nigerian Navy has debunked the reports that comedian, Abdulgafar AA, popularly known as Cute Abiola, is missing.

His family and associates had declared Cute Abiola, who is a Naval officer, missing, with many of his colleagues in the entertainment industry raising the alarm.

They suspected he was locked up by the Nigerian Navy after reporting to the office on Monday.

But in a statement by Suleman Dahun, spokesman of the Nigerian Navy, said the comedian is being detained for flouting the social media policy of the Armed Forces.

Uduak Umoh, the best friend to murdered Akwa Ibom job seeker, Iniubong Umoren, and the deceased elder sister, Ifiok Umoren, have given their testimonies at the ongoing trial of Uduak Akpan, the suspected killer.

Akpan, a 20-year old undergraduate, is standing trial alongside his father, Frank Akpan, and elder sister, Anwan Bassey Akpan, over the gruesome murder of Iniubong whom he was said to have lured, raped, and killed under the guise of offering her a job.

Testifying before Justice Bassey Nkanang at the state High Court, Umoh told the court that her late friend had on April 29, 2021, told her that she was going for a job interview in Uruan Local Government Area, but that she did not have transport fare.