By Reallife. (self media writer) | 2 years ago

The National Knowledge Management and Communication Coordinator for LIFE-ND, Dr. Desmond Okocha, has described Governor Okezie Ikpeazu as a pacesetter for providing all the necessary support that the LIFE-ND project needs in Abia State to be successful.

Okocha was in the State as part of a delegation from the national office of LIFE-ND who are in the State to supervise and provide technical support to the ongoing sensitization and community profiling and rural institution mapping exercise.

In a chat with news men, Dr. Okocha was full of praise for the LIFE-ND State Project Coordinator, disclosed that the International Fund for Agricultural Development, IFAD, which is one of the arms of the United Nations, has committed some funds for alleviating poverty in the nine States of Niger Delta with Abia state being one of those key States.

According to him the project, which covers the young people between the ages of 18 and 35 and women headed household, will be executed across 900 Communities of the Niger Delta where ten Local Government Areas will be chosen from each state and ten Communities chosen from each Local Government, adding that they were doing community mapping, commodity mapping and surveying to understand the nitty gritty of the people so that the programme will achieve the needed objective and target.

He used the opportunity to describe Abia as a model State in the implementation of the project and called on other States to borrow a leaf from what Abia is doing in implementing their own project.

He said: "I want to use this opportunity to appreciate what the Governor is doing in the State over the years, right from the recruitment process, he ensured that the LIFE-ND project in the State gets an office, in providing the State counterpart fund, he made sure that was done and in other areas, he has been a pacesetter as far as that is concerned. He has been fair in the selection of commodities, selection of Communities, and even the selection of incubators, it has been a transparent process. So Abia State is a model and I think other states should borrow some of these things in implementing their own project."

According to him: "Every machinery is on ground already to ensure the project succeeds. So I want to say to the Communities: give us your maximum support and as you go forward from this point, few months from now, we shall see the incubators in place, the incubatees in place and I believe that this will skyrocket development of the Niger Delta and Abia in particular."

Also speaking, the Rural Institutions Coordinator, LIFE-ND, Dr. Clement Uwem observed that Abia State is doing extremely well judging from the support from the State Government to the extent that "the Communities have owned up this project."

According to him, "The message I'm going back with is, I want other states to follow the example of Abia. Abia is taking the lead in strong organization, strong community participation and I see strong coordination at the State Office, everybody is involved."

Dr. Uwem who described agriculture as an enterprise that needs a lot of patience, called for attitude shift on the part of the beneficiaries and see agriculture as a sustainable means of livelihood noting that time has come to build entrepreneurs among the youths as a means of providing employment in the Niger Delta which According to him, was the essence of the LIFE-ND project. 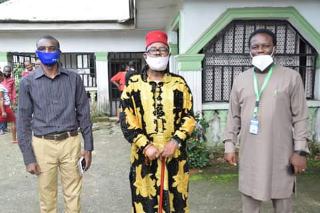 He maintained that the project wants to leverage on the energy of the youth to increase our GDP from the Agriculture sector as well as sustaining our National growth through agriculture sector contributions using the youth as a means of driving this process.

Content created and supplied by: Reallife. (via Opera News )