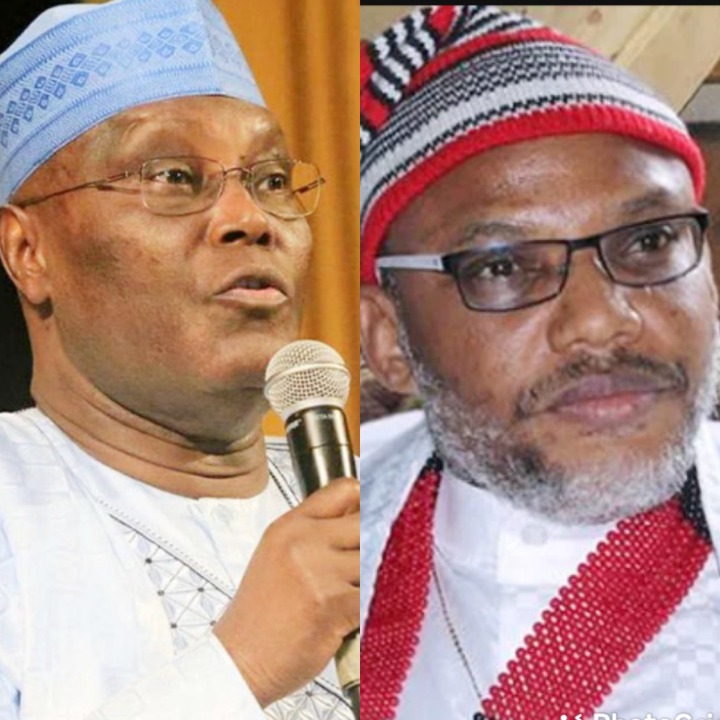 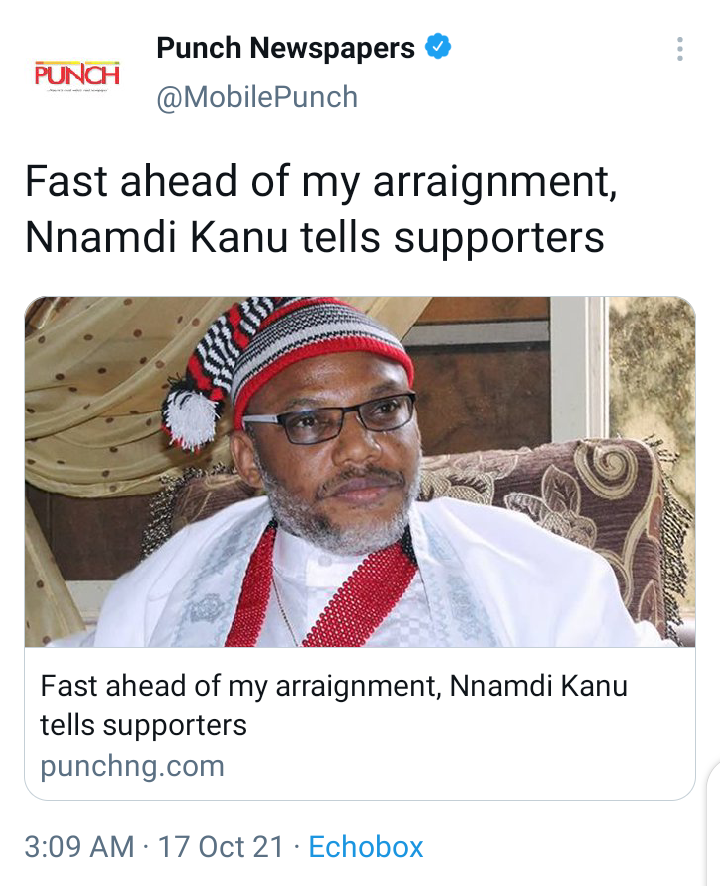 Ahead of his arraignment on October 21, the detained leader of the Indigenous People of Biafra, Nnamdi Kanu, has asked millions of his supporters to embark on a dry fast.

His counsel, Ifeanyi Ejiofor, who stated this on his verified Facebook page, also stated that Kanu was well.

Ejiofor said Kanu asked him to tell his followers that he was in high spirits ahead of his arraignment at the Federal High Court in Abuja next Thursday.

He wrote partly, “Prominent among the falsehoods desperately championed by mischief makers is the trending subject that our dear client, Onyendu Mazi Nnamdi Kanu, has been flown to China, and from China to Israel, and from Israel to Kontokatafi etc.

“We know the purveyors of this fake news and they are aware that their evil conspiracies are dead on arrival.

“Onyendu was equally amazed by the fake news that was making headlines on some social media platforms that he was asked to sign a document before regaining his freedom. This is total falsehood and he is urging his esteemed followers to please ignore this falsehood.

“Above all, our indefatigable client is strong and tenaciously holding firm in spirit. He is ready for the 21st October 2021 appearance in court. This date is sacrosanct and shall remain so.

"Nigerians Will Give PDP Victory In 2023" -Atiku 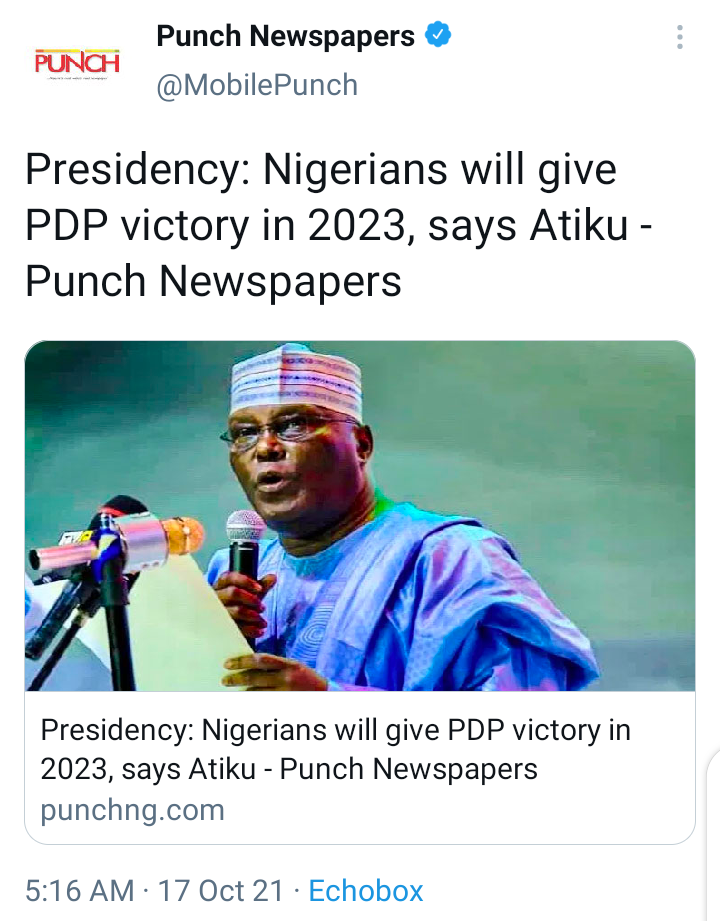 Former Vice President, Atiku Abubakar, has expressed confidence that Nigerians will return the Peoples Democratic Party to power in the 2023 presidential election.

Atiku, who urged politicians to respect the party’s electoral guideline and the nation’s constitution in the election, said democracy can only triumph in a free and fair environment.

Speaking shortly after casting his vote at the PDP congress in Adamawa State, he said the party would set the pace for others in electoral transparency.

“ You can see that it (congress) is transparent and credible. Over time, we have developed the spirit of consensus both at the state and national levels. I believe these are the basis for the confidence Nigerians now have in the PDP, to vote back the PDP into power,” he said. 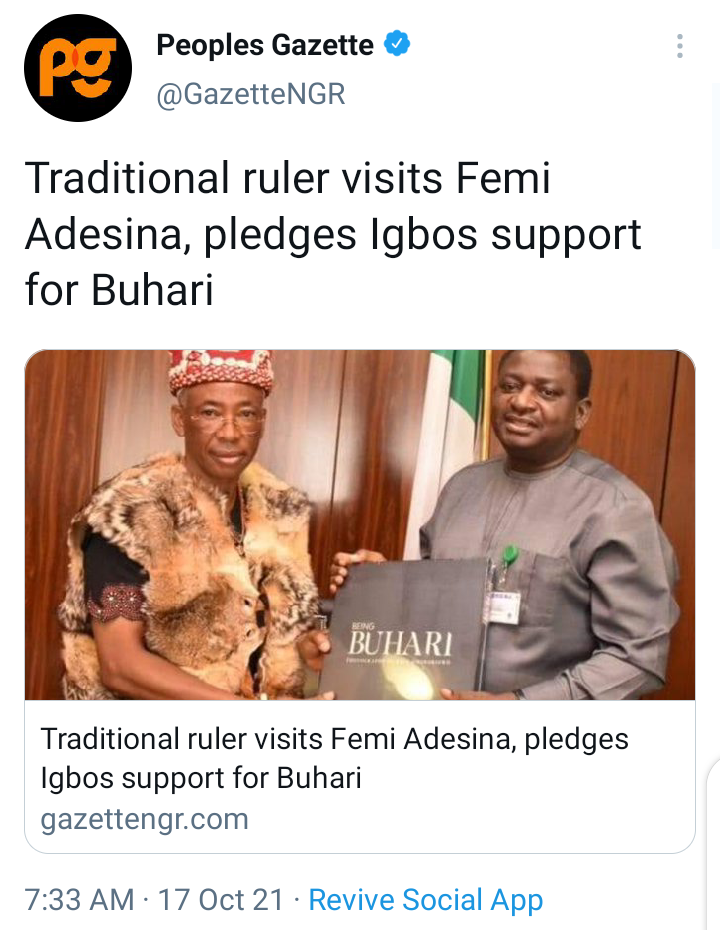 The Ezeani II of Mmaku Kingdom in Enugu, Maduabuchi Nevobasi, has promised President Muhammadu Buhari the support of Igbos in the South-East.

During a visit to Femi Adesina, Special Adviser to the president on Media and Publicity in Abuja, Mr Nevobasi said, Mr Buhari will always be welcomed to the region.

Describing the civil war as a “war of unity”, Mr Nevobasi said aside from his unifying role in the war fought against the Igbos, Mr Buhari had done many things for the Igbos.

“Look at the Second River Niger Bridge, which is going on at a frenetic pace. Enugu International Airport has a brand new runway and is now in use.

“The Enugu-Port-Harcourt Expressway, Onitsha-Enugu road, and many others are also things to point at in the region,” the traditional ruler told Mr Buhari’s spokesperson.

Mr Nevobasi who gave the traditional title of Isimmri 1 of Mmaku (Main Source of Water) to Mr Buhari in 2018, praised the president’s “admirable strides” in fighting corruption.