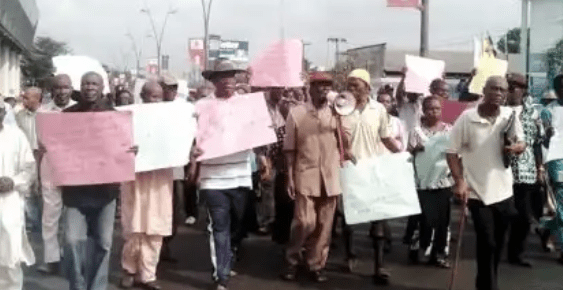 Retirees in the six southwest states under the umbrella the Nigeria Union of Pensioners (NUP) have issued 21days ultimatum to Lagos State Governor, Babajide Sanwoolu to settle all outstanding entitlements of pensioners in the state or face mass protests of members.

The NUP leaders who commended Governor Oluwarotimi Akeredolu for approving 33% pension increase recently, pleaded with him to device means of offsetting accumulated gratuities of pensioners in Ondo state.

The Union stated this at the State Secretariat in Akure, the Ondo state capital, during its Southwest Council meeting attended by zonal officers, state Chairmen and State Secretary.

Briefing newsmen after the meeting, the Zonal Public Relations Officer of NUP, Chief Olusegun Abatan, said Lagos state government had remained the most unfriendly government to Pensioners in the southwest, hence the decision to follow the due process in protesting against Sanwoolu.The pensioners also called on the federal government to issue circular on the implementation of pension increment in line with the 2018 minimum wage for workers.

The NUP zonal officers who described Akeredolu and his Oyo state counterpart, Engr Seyi Makinde as pensioners’ friendly governors, commended them for timely payment of their monthly pension since they assumed office, however urging them to be more proactive in settling accumulated gratuities.

The retirees who accused the Lagos, Ekiti, Osun and Ogun state governments of shirking away from financial responsibilities on gratuities and pension payment, advised the state governors to be compassionate to the senior citizens, as old age hazards and health challenges were bitter experiences among pensioners.

The NUP leaders said, “the minimum pension increase, some pensioners still receive #3,30 (three hundred and thirty naira) as monthly take home. It is unfair and criminal, government should release circular on pension increase as soon as possible.

On the ravaging COVID-19 pandemic, the pensioners cautioned government not to contemplate another lockdown for the country as many people are now dying of hunger since the outbreak of the disease.

On the controversy surrounding the resumption of some students amidst coronavirus pandemic, the NUP zonal officers advised government to put in place preventive measures that would allow Primary 6, JSS and SSS 3 students to write their exams including WAEC exam.

According to Abatan, “We want to show our displeasure to Governors in the SouthWest that failed to pay gratuities and pensions. Mentions should be made of Lagos Government, Ekiti State and Osun State.

“We are going to send letters to Governor Sanwo Olu to please address these issues or the whole South West pensioners will bombard Lagos in a very serious protest. The Southwest Caucus has decided that all pensioners in the Southwest will go to Lagos because an injury to one is an injury to all.

“The Federal Government just addressed wage increase for workers. There is na aspect of the constitution that says as wages and salaries of workers increase pension should also be increased.

“He has approved 33 pension arrears for pensioners. This memo has been on the table since 2010. “We want Akeredolu to address the discrepancies between state pensioners and local government pensioners.

“He has not reneged on that. He has been paying gratuity of retired primary school teachers and local government pensioners that were stopped for over eight years before he became governor. He has also increased the gratuities of MDAs in Oyo State,” the NUP PRO said.