Finally: Ibrahim Magu has been released 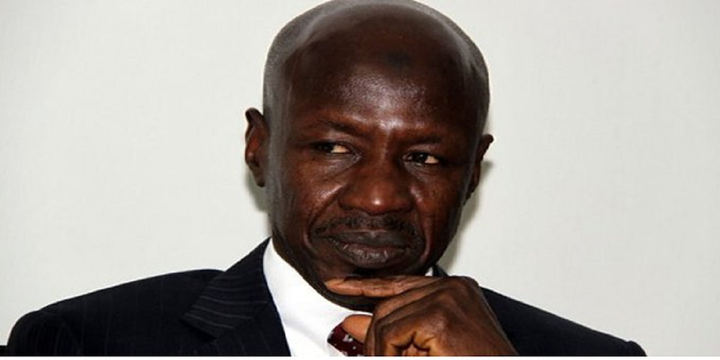 Ibrahim Magu has been released.

The Acting Chairman of the Economic and Financial Crimes Commission (EFCC), Ibrahim Magu, has been released.

It was reported that Magu was released on Wednesday evening after spending 10 days in custody.

It was reports that although Magu's bail conditions are difficult to obtain, sources confirm that he has returned home .

This is the second week that Magu has been investigated for alleged corruption and disobedience, according to the Minister of Justice, Abubakar Malami, who has lodged a complaint with the presidency.

Since his arraignment before the Presidential Commission of Inquiry, Magu has not returned home and is being held at the National Police Headquarters.

Magu was first arraigned before a commission of inquiry on Monday, July 6, and has since been abducted by police officers to their headquarters.

Magu is taken to the presidential palace by police whenever he appears before a commission of inquiry to further answer questions on the charges against him.

The Inspector General of Police (IGP), Mohammed Adamu, has informed Ibrahim Magu that he is not responsible for his detention.

However, in response letter CB: 7000 / IGP / .SEC / ABJ / VOL.489 / 171 sent by the IGP to Magu's lawyer, he informed him that he had diverted his request to the Commission of Inquiry into the allegations. being made for the Magu.

The IGP sent the letter to Ojoamo on Tuesday, July 14, 2020, four days after the lawyer sent a letter seeking Magu's bail.

Part of the letter states that; "The IGP wants to draw your attention to the fact that the police are not investigating CP Ibrahim Magu (the person you represent), but the EFCC's Commission of Inquiry is investigating him.

Therefore, the IGP advises you to direct your request to the chairman of the inquiry committee to get a proper answer .