By Oladnews (self media writer) | 1 year ago 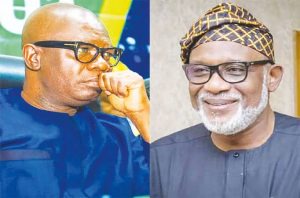 Mr Agoola Ajayi, the state deputy governor of Ondo has reacted to the statement made by his boss in person of Governor Akeredolu towards him by saying he has made a mistake of appointing Mr Ajayi as his deputy Governor.

According to the report, Mr Ajayi replied his boss as a frustrated politician. Governor Akeredolu contested for a governorship in the year 2012, won by Dr. Olusegun Mimiko of Labour Party, but during 2016 election he was the one that helped him and he won the election.

Due to this crisis, the Governor and his deputy as parted way and the deputy governor is now in Peoples Democratic Party (PDP) where he is currently a governorship aspirant.

He continued his speech that there are many times the state House of Assembly has tried there efforts to remove him but it was unsuccessful.

Also in his statement which was reported by Babatope Okeowo the State Secretary said that Governor Akeredolu was frustrated due to inability to remove his deputy with the help of the House of Assembly having heavily induced them with state funds to do so.

Babatunde added that Governor Akeredolu is running the state under inflated contract, clannishness and malfeasance through the N4.3 billion kept in secret account of Zenith Bank and disbursed without legislative approval.

He continued that Governor Akeredolu has really made a mistake for allowing his deputy governor to leave him.