By NaijaReacts (self media writer) | 5 months ago

Secessionist Groups Issues Heavy Threats To FG, Over The Arrest Of Nnamdi Kanu:

Two Secessionist groups, the Biafra Think Tank and The Biafra Watchdogs, have threatened to attack the Nigerian National Assembly complex, Aso Rock and its Presidential villa, the Force Headquarters, Nigeria Army Headquarters, among others. 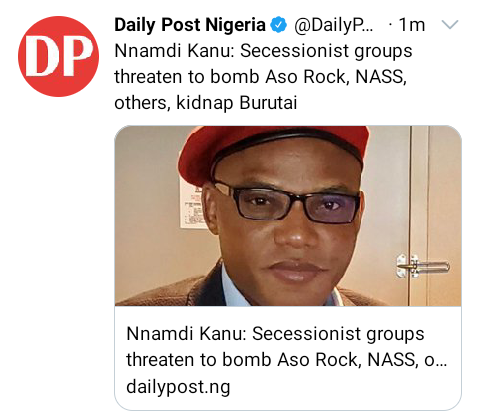 Their threats follow the arrest of Nnamdi Kanu, leader of the Indigenous People of Biafra (IPOB).

The group also threatened to kidnap all the ambassadors of the Buhari government including the former Chief of Army Staff, Yusuf Burutai and keep them hostage until Nnamdi Kanu is released and President Muhammadu Buhari signs and announces Biafra.

The statement said: “We shall inform the public and the country and airlines that gave out our leader, Kanu’s details and ensure that the staff, plane, and the country pays dearly or we will give their own country's useful information to Jihadists or ISIS to attack their government complex.

“Today we have agreed and decided to kidnap all the ambassadors of Buhari government including Burutai and keep them hostage till they release Mazi Nnamdi Kanu and until Buhari signs and declares Biafra.

Nnamdi Kanu, who was arrested, allegedly in Kenya at the weekend, was taken to court on Tuesday and is currently being detained at the Department of State Service, DSS. 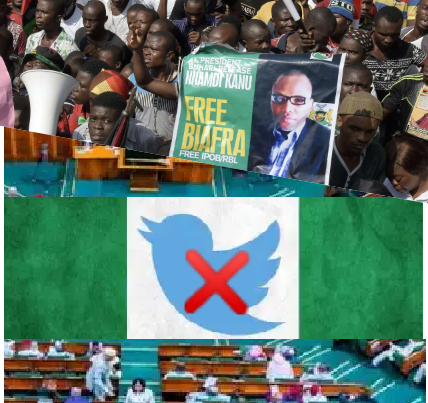 Nigeria's House Of Representatives Votes Against Lifting Of Twitter Ban:

The House of Representatives, on Thursday, rejected the lifting of suspension on micro-blogging site, Twitter. 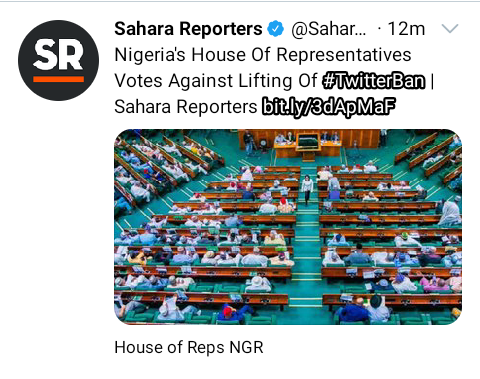 The rejection came while the House was considering the report of its Committee on the matter.

The House had mandated its Committees on Information, ICT, Intelligence, Justice and Orientation to investigate the circumstances surrounding the suspension of Twitter by the Nigerian government.

At the consideration of the report, the Deputy Minority Leader of the House, Toby Okechukwu suggested an amendment to one of the recommendations.

It states “that the Federal Government should take into cognizance the negative effect of the Twitter suspension on Nigerians who depend on the platform for their livelihood,” and lift the suspension.

Seconded by another member, the motion was however rejected by the majority of the House when put to vote.

Just last week, the Nigerian government had announced that it had set up a committee to negotiate with social media giant, Twitter, a few weeks after a controversial government ban.

Nigeria recently banned Twitter after the social media platform deleted a tweet by President Muhammadu Buhari. The Nigerian government also accused Twitter of acting against the interest of Nigeria.

The ban has been condemned by many Nigerians, human rights groups and foreign governments, describing it as an attack on the freedom of expression.

The people of Garmar Hannu Village of Maru Local Government Area in Zamfara State have on Thursday blocked Sokoto-Gusau Road, protesting against persistent killings of their people by bandits. 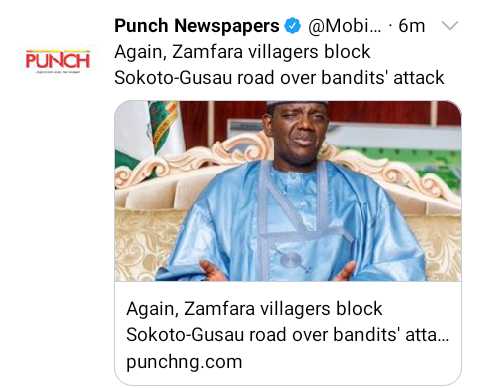 Sokoto-Gusau Road is the most busiest road in the state as it links Sokoto, Kebbi and Zamfara states to other parts of the country including Kano, Kaduna, Abuja, Lagos and Port Harcourt.

The villagers who were mostly women and children blocked the road near Tashar Abu in Bungudu Local Government Area of the state, refusing to allow motorists to pass through.

The security personnel sent to the place to secure the road could not disperse the angry protesters until some bandits on motorcycles carrying guns approached the place. 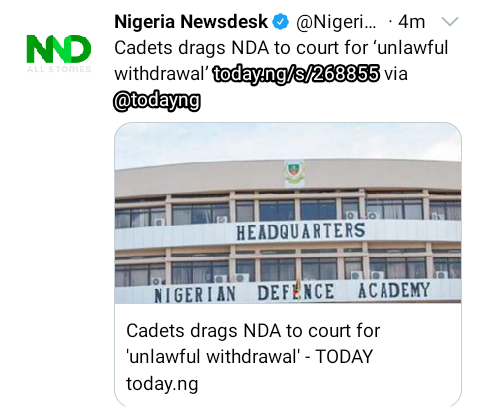 The other co-defendants in the suit are the Commandant and Council of NDA, and Chief of Defence Staff.

The claimants’ counsel, P.A Attah, told the court that the matter was slated for mention.

However, neither the defendants nor their legal representatives were present in court for the day’s proceeding.

The judge adjourned the matter until September 27 for hearing and equally directed that hearing notices be served on the defendants.

The claimants, Lawal and Oranu, in their reliefs, are seeking a declaration that their purported withdrawal from the Academy with effect from January 22, 2020 on the grounds of dossier review was malicious, done in bad faith, ultra vires.

The claimants are also seeking an order of the court reinstating them to status quo, by vesting upon them their rightful seniority on rank and seniority on arm of bars commensurate with their year of commencement of cadet training and payment of their accrued entitlements and emoluments.

In addition, they are equally seeking an order of the court, in the alternative of the above, for payment of damages in the sum of N500,000 million each and the sum of N1,000,000 each as cost of prosecuting the suit.

The claimants claimed that on January 22, 2020, the Academy released a Routine order containing their names among other cadets, that they had been withdrawn on the basis of a purported dossier review, hence their approaching the court to seek redress.