By Ayodeleking01 (self media writer) | 1 month ago

Seyi Makinde, the Governor of Oyo State, has disputed that members of the Peoples Democratic Party Governors' Forum are pressuring the party's outgoing National Chairman, Uche Secondus, to drop his lawsuit against the party in court. 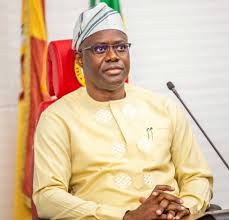 In the 2023 general elections, Makinde also denied having presidential or vice-presidential ambitions.

Members of the PDP who have failed to use the party's internal conflict resolution mechanism before taking it via the courts, particularly in order to sabotage the upcoming national convention, should not be permitted to benefit from the party, he said.

"This is a democratic party," Makinde remarked in response to a query about the possible impact of Secondus' case on the PDP's upcoming national convention. We have faith in the legal system. By all means, he is free to pursue his case. But we have internal processes for the party to settle internal disputes, and I believe that mechanism is still in place."

“We cannot put pressure on him,” he responded when asked to clarify reports that PDP governors were pressuring Secondus to drop the legal action. These are grownups who are capable of acting as leaders in their own right. It doesn't work that way when you're in charge of a state. No. You must have gone through some sort of procedure. Before you are recognized fit to hold the rank or post of the state governor, you must have been scrutinized by the people of your state.”

"This is someone who, at the commencement of this Fourth Republic, he was the chairman of the party in Rivers State," Makinde said of the claim that Secondus was treated unfairly. He then transferred from Rivers to the national level (leadership). He was the party's National Organising Secretary. He was the National Chairman's Deputy. He served as both the Acting Chairman and the National Chairman. I believe he has reaped so much benefit from the party that the very least we could expect from him was to give back to it and serve as a stabilizing force."