"I will not return to Abuja until the project ends" - Oshiomhole explains.

A former Edo state governor, Comrade Adams Oshiomhole has promised not to resign until Godwin Obaseki, is removed from office in the upcoming state government elections. 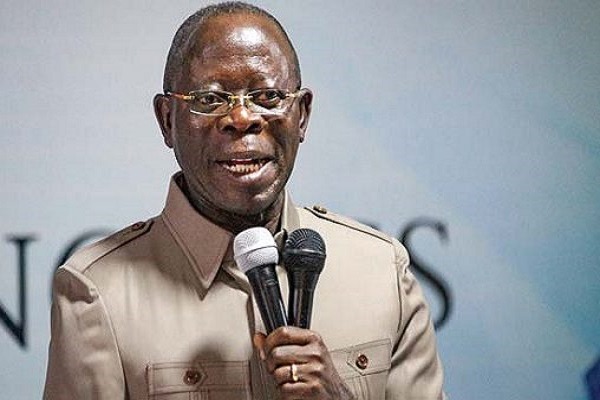 Oshiomhole spoke to a crowd of all supporters of the Congress of Progress, APC, who picked him up with his arrival from Abuja over the weekend.

Oshiomhole regretted that Obaseki, whom he appointed to succeed him in 2016, allegedly turned into a snake and began fighting party members by destroying their property and arresting them without reason.

"I have only come home for one project. I will not return to Abuja until the project ends. I came home not to rest, but to work," said Oshiomhole.

"The governor was destroying our members' homes while some were incarcerated to press charges; these are the people who fought for him to become governor."

"I begged those who were being persecuted to take it easy, not to burn down the house we all work to build because we want to smoke the snake. Now, the snake is smoked outside the house."

"A few weeks ago, the snake said that the APC was his home and that he was not leaving. Less than 72 hours after saying that, he left.

"If we had set the house on fire because the snake was causing us a problem, we would all be homeless now," I added.

Recall that Obaseki had resigned from the APC after a meeting with President Muhammadu Buhari last month.

His resignation came after he was disqualified from participating in the party's ruling beginnings.

The APC review committee had disqualified Obaseki for what he called the damaged certificate.

Later I joined the PDP, where I participated in the party's primary elections and emerged as the party's candidate for the September 2020 government elections.

Pastor Osagie Ize-iyamu will hold the APC flag in the governor's election after he was declared the winner of the Edo state party primary with a total of 27,838 votes.