Hausaland before the Advent of Islam 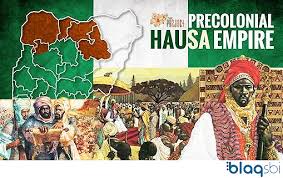 Hausaland, lying mainly in the Nigerian savannah, has featured prominently in the history of West Africa. Geographically, the area is sandwiched between the western and central Sudan and has been greatly influenced by developments arising from the strong links established quite early between the Sudan and the Moslem world across the Sahara. The greatest of these influences was, undoubtedly, Islam, which, as we have noted, is one of the two distinguishing features of the cultural traits of the Hausa.

The Hausa language, the other major index of the Hausa cultural category, shows little evidence of extensive external influence on the development of Hausa culture before the introduction of Islam. Claims by Johnston and Smith on Berber political and cultural influence on Hausa society before the advent of Islam are therefore historically untenable. The trans-Saharan trade routes connecting Mali Empire in the west and Kanem in the east did not link Hausaland. Therefore, Hausaland was insulated from the ideological and cultural influences penetrating the Sudan from North Africa.

It remained in relative isolation up to the end of the thirteenth century. Prior to the introduction of Islam Hausaland or Kasar Hausa went through a gradual process of political and cultural evolution based on walled cities (birane), an agrarian economy and a kingship institution revolving around a powerful sarakuna. Between the ninth and the eleventh centuries, the birane experienced several phases of dynastic and institutional changes that produced a political culture described by Bala Usman as the Sarauta system.

This development led to the emergence of the Seven Hausa States (Hausa Bakwai) – Kano, Rano, Daura, Katsina, Gobir, Zazzau and Biram (Garun Gabas) plus other secondary states described as the Banza Bakwai. Within the period, the Hausa states went through a gradual process of internal transformation during which they strengthened their political and military capability and successfully executed policies of territorial expansion. By the end of the fourteenth century some of these states, especially Kano, Katsina and Zaria, had emerged as strong contenders for power and influence in Hausaland. Perhaps, this internal transformation attracted the external world to Hausaland. In any case, the emergence of the states as strong political units with centralised political institutions coincided with, although it was not dependent on, the arrival of foreign, mainly Muslim, influences in Hausaland.