By FirmBeliever (self media writer) | 7 months ago 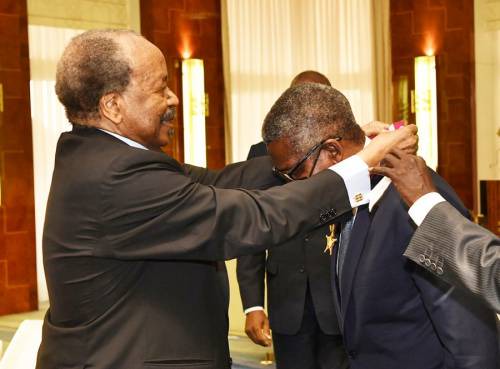 The Cameroonian president, Paul Biya has recently just conferred the title of the highest honored civilian in the country, on the President/Chief Executive of Dangote Industries Limited, Aliko Dangote. The honor was received by Dangote through the Commander of the National Order of Valour honor in recognition of his efforts in the infrastructural development of Cameroon and Africa, through his series of businesses, especially his cement plants located within the country.

In his speech, following and after the honor as bestowed on Dangote, the president expressed just how proud he was that Dangote has been able to perform such great infrastructural development within Cameroon, and his efforts to promote industrialization in the country and across Africa. His effort at industrialization was greatly appreciated and highlighted through the building of cement plants in several African countries at a conferment ceremony held at the Unity Palace.

While speaking, the president urged the Richest man in Africa, Aliko Dangote, to ensure he considers more investments in the manufacturing sector in Cameroon while explaining that Cameroon has numerous business opportunities, many of which are available to the African investor. He went on to note that the plants built by Dangote have been able to effectively create jobs for thousands of its citizens, both directly and indirectly, and in various locations, which has also helped in boosting the economies of African countries, just as it has done for Cameroon, so far.

The President in his speech stated that his "government is focused on promoting a business-friendly environment to make the country more attractive and an investors’ destination."

As is expected, Dangote wasn't without his appreciations, and gratitude, he expressed his gratitude to the president of Cameroon for the great honor which he has conferred on him, while also discussing his great plans for the nation of Cameroon and Africa. Dangote discussed his plans to diversify the group's investments in the country, and he plans on starting with 'energy'. In his words, Dangote stated, “We have plans to expand our investment to other sectors beginning with oil and gas while our capacity in cement will be expanded.”

While speaking and giving gratitude to the nation of Cameroon and its president for the considering and the conferment, he expressed his thanks and appreciation for the efforts of the Cameroonian president in solving the challenges encountered in the construction plant. Dangote gave credit to the government, for enabling ease of business, through the provision of a favorable environment, which has since aided the successful completion of the Dangote cement plant. Dangote stated that at the initial period of construction activities, and manufacturing processes, they encountered some activities at the plant. He added that "the government stepped in and ensured that we overcame these initial problems."

"We feel very much at home here in Cameroon because of the business-friendly environment. If demand for cement increases, we will increase the capacity of the plant and make the country self-sufficient in cement production," Dangote added.