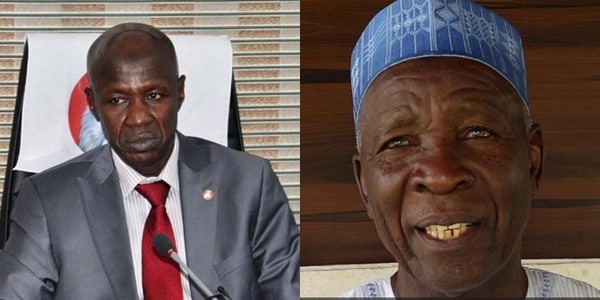 Buba Galadima, former ally to President Buhari, said that the removal of Ibrahim Magu, who was suspended as the chairman of the EFCC (Economic and Financial Crimes Commission), was a mere propaganda.

President Buhari appointed Umar Mohammaded, the former director of operations for the EFCC, as the new acting head of the anti-graft Agency after the suspension of Magu.

During an interview with reporters, Galadima expressed that Magu’s suspension was simply a case of “use & dump”.

Buba Galadima had alleged that Magu had being doing the bidding of some very powerful people in the current administration but had stepped on certain toes which led to the suspension of the former EFCC Boss.

“Magu's suspension was very long overdue. Magu should have being long suspended from his position, but why it took Buhari’s administration 5 years to remove him is a surprise to many people, but for me, it is'nt” he said.

“he remained in that office for so long because he was doing the bidding of some very powerful people in Buhari’s administration.

“it seems he obviously stepped on some toes, & that is why they have now decided to do away with him.”

Buba Galadima also said that the ongoing probe is a propaganda, sugesting that nothing fruitful will come out of it.

“I believe that Magu offended an influential cabal in Buhari’s administration, & that is why they decided to remove him,” he added.

“I am not defending Magu, although I have never being an admirer butpeople should not be deceived, that Magu was sacked as a result of Buhari’s administration’s commitment to the anti corruption war. Magu is being made a scape-goat to create the illusion that Buhari's administration is fighting corruption. Mark my words, nothing will come out from Magu’s case. It is as though they want to entertain us, it's all a part of propaganda.”