See more details about the poorest president in the world.

By Samuelele (self media writer) | 1 year ago 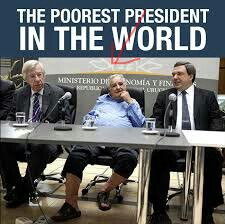 Jose Mujica has been described as the world poorest president.

He served his country as the president ( Uruguay),and was elected in the year 2009. He lives in a farmhouse with his wife who loves growing flowers.

In his speech he said, the fact that he is termed as the world poorest president doesn't mean he is poor. He said that those who are poor are those who have money and are still struggling to get more money and become rich everyday.

He donate about 90% percent of his salary which his about $12000 to charity. He only has his wife, a dog and two police men with him in his farmhouse just for protection.

The farmhouse has been bought by him and his wife a long time ago and they really use to work hard on the farm growing flowers.

He accused most leaders of the world of trying to have wealth, saying that they are blind money seekers. He said the earth does not have enough resources for everyone to be rich. He further said that, it is our level of hyper-consumption that is harming our planet.

Many laugh at him for the kind of life that he lives but that does not stop him from accusing government leaders.

He is no more allowed to be a president since he can't contest for an election again according to the countries law.