Edo 2020 : Check Out Reactions As Oshiomhole Calls Obaseki A 'Snake' 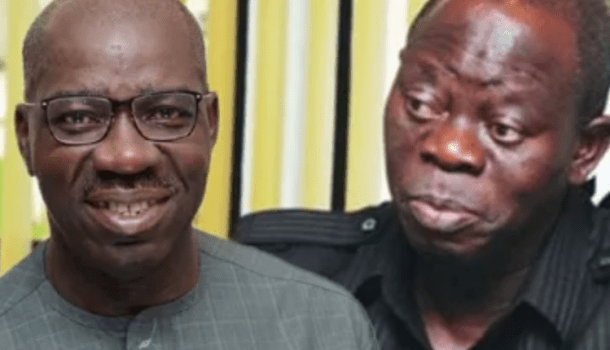 Nigerians have started reacting to the statement credited to the immediate past National Chairman of the All Progressives Congress, APC. Adams Oshiomhole.

The former Edo state governor had over the weekend referred to his predecessor, Governor Godwin Obaseki, the governorship candidate of the People's Democratic presidential in the forthcoming gubernatorial election in Edo State as a snake. While addressing party supporters in his country home after his return from Benin City said that those politicians who wanted to destroy the All Progressives Congress have been smoked out.

“Few weeks earlier, the snake (Obaseki) said All Progressives Congress was his house and that he was not leaving, but less than 72 hours after saying this, he left for the People Democratic Party. "

“If we the All Progressives Congress had burnt the house because the snake was giving us problem, we will all have been homeless by now.”

Oshiomhole concluded that he made a mistake supporting Governor Godwin Obaseki during the 2016 election, adding that “the bad heads in our party are gone”. “I begged those who were being persecuted to take it easy, that they shouldn’t burn the All Progressives Congress house we all laboured to build because we want to smoke out the snake and now, the snake has been smoked out of the house.

Oshiomhole and Obaseki were engaged in war of words which eventually led to the defection of Obaseki to the PDP after he was disqualified from taking part in the governorship primaries of the APC.

See Nigerians reacting via tweets below :

Yes I agree. Obaseki is the snake to Oshiomhole but ADAMS ALIYU OSHIOMHOLE IS THE REAL SNAKE who cunningly caused Nigerians to sin against God by believing in him. Oshiomhole is the actual WOLF IN SHEEP'S CLOTHING.

did not listen in the beginning of the the whole squabble and he landed in pit. He is still not listening now, he is going to fall inside another hot pit. The goat that the gods have chosen for sacrifice at night, runs to the shrine by itself at dawn.

Look who's talking! If we were to engage in name-calling based on physical attributes, between Obaseki and Oshiomhole who more closely resembles a snake, or may be a toad?