The strong political activities within the Peoples Democratic Party (PDP) make it impossible to ignore any event or activity by politicians of the party. Currently, there is serious politicking and lobbying by PDP politicians concerning the emergence of candidates for the key positions in the party. Recall that the party is set to hold its national convention where the new leaders of the party will emerge.

That being said, a recent activity of Governor Samuel Ortom of Benue State can not be overlooked, especially what occurred after he carried out the activity. It was reported about six days ago that Governor Samuel Ortom visited Maryam Ciroma in her Abuja residence to pay condolence to her, over the death of her husband Adamu Ciroma who was a former President of the Central Bank. 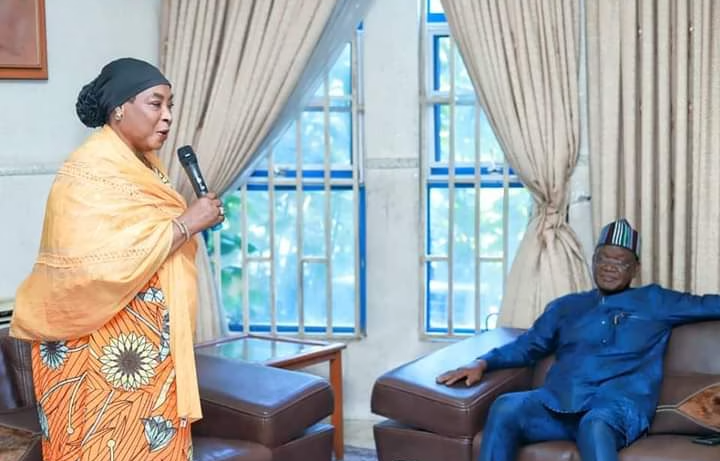 It was also contained in the report that Maryam Ciroma extolled Governor Ortom during the visit as an exemplary leader and also appreciated the good works he is doing while claiming that Nigerians need more fearless governors like Governor Ortom at this period the country is facing several challenges.

Going forward, a more recent report has revealed that Maryam Ciroma has suddenly declared interest in the national deputy chairmanship position (north), that was zoned to the northeast. From the report, her declaration of interest and subsequent picking of form has unsettled some PDP stakeholders in the northeastern region who were preparing to present Amb. Umar Damagun as the consensus candidate.

How does the visit of Governor Ortom to Maryam Ciroma and her subsequent picking up of form correlate?

First of all, the media report about the visit of Governor Ortom to Maryam Ciroma in Abuja was to pay condolence over the death of her husband, that's a very good thing to do. However, a quick search revealed that the late husband of Maryam Ciroma who is Mr. Adamu Ciroma died in 2018 which is three years ago. So does it mean that for three years now, Governor Ortom has not had the opportunity to visit Maryam Ciroma?

Also, her show of interest is sudden because from the report, it is obvious that she wasn't in the plans of the northeastern PDP stakeholders, and this is just a few days to the national convention. Also, for her to join the race for such a key position like the national deputy chairman of the party at this late hour, it is obvious she has strong backings like Governor Ortom to pull through. Recall the way she praised Governor Ortom at her residence, it shows they have a good political relationship.

Moreso, it is also good to point out that Governor Ortom in recent times has shown that he has political influence in the northern zone of PDP. This could be seen as he strongly backed Sen. Ayu who eventually emerged as the consensus candidate from the northern region for the chairmanship position. Hence, could it be said that Governor Ortom could have influenced the sudden show of interest by Maryam Ciroma for the position of the deputy national chairman (north)?. This will surely be one of the unravelings as the national convention draws near and subsequent activities within the party.

What do you think? Join the conversation and drop your comments and opinions.