[OPINION] 2023: Uzodinma May Flush Okorocha, Araraume out of Politics

By DigitalKitchen (self media writer) | 19 days ago 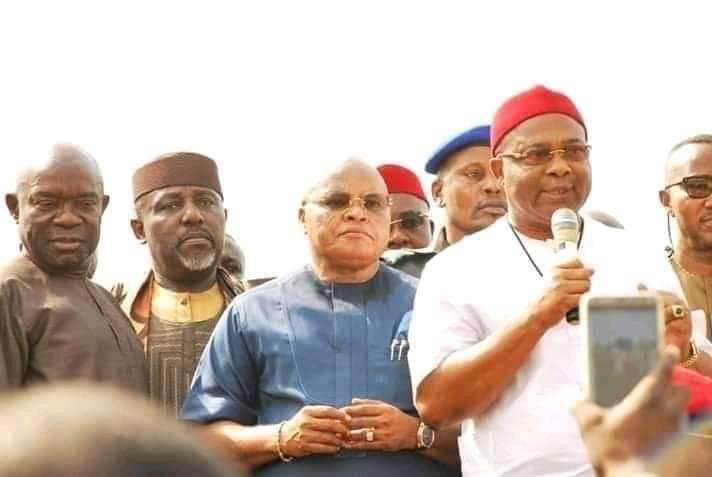 2023 would be a deciding factor for many political heavyweights in Imo State, as it may signal their final retirement from political aspirations, to the background, where they may manage to become kingmakers.

Two major political forces who run the risk of permanent retirement from political aspirations in the state, are the former governor of Imo State, and Senator representing Orlu zone, Senator Rochas Okorocha, alongside his political ally, the former senator from Okigwe zone, Senator Ifeanyi Araraume.

Both men are presently engaged in fierce political battle with Senator Hope Uzodinma over issues bordering on the control of the party in the state, as it could translate to what happens in 2023.

While Araraume’s future aspirations are yet unclear, following his recent appointment as the Board Chairman of the NNPC, Okorocha seems to be standing on a two-way road, dangling between contesting for the presidency of the nation, or returning to the Senate.

In both counts, Okorocha faces serious obstacles, of which Uzodinma may hold the key to what happens to him politically.

While Okorocha may not be able to get the APC ticket for presidency, and may opt for run as a running mate to whoever gets it, if the person is from the North, getting the party’s ticket to return to the Senate may become even more difficult for him, than the presidential ticket of the party.

With Uzodinma in complete control of the party in the state, despite attempts by the Okorocha led Rescue Mission political family, to foist the sacked Chairman, Daniel Madueke Nwafor on the party; it may become a nearly impossible task for Okorocha to get the APC ticket for Orlu Senate seat in 2023.

Already, some close political allies of Senator Hope Uzodinma are set to have their eyes set on the ticket, and may likely get the ticket over Okorocha, if Uzodinma’s hold over the party becomes absolute, with the outcome of the State Congress.

In the event that Okorocha loses out of the party, the only options left for him, might be to contest under a different platform like the PDP.

Failure to return to the Senate, or emerge Nigerian President or Vice in 2023, may signal Okorocha’s retirement from power, as he might not be able to rally enough political power beyond 2023, to attempt for elective positions again.

Araraume on the other hand, have not hidden his desire to contest the govenrorship seat in the state.

As a serial governorship aspirant and candidate since 2007, 2023 may be his last attempt at getting the seat that has long eluded him.

With his recent appointment, Araraume is deemed to be more powerful politically, and could cause serious upset within the APC.

The coalition of Araraume and Okorocha may attempt to outwit Uzodinma, and take away the party’s ticket from him.

However, failure to emerge as the party’s candidate in 2023, may leave Araraume with the option on going to another party that would give him their ticket, or retire from future elective aspirations.

He may settle for political appointments and accept the fact, that he would never occupy the seat his political rival Dr Ikedi Ohakim occupied.

Okorocha recently extended an olive branch to Uzodinma, begging him to let peace reign between them, but pundits are of the view that even if Uzodinma accepts to mend fences with his predecessor, he may not back him for the political offices he seeks.

Uzodinma on his part have stated that he has no personal problems with Okorocha, but insists on recovering from his predecessor, every property of the state, allegedly looted by him during his time in office.