These are presidents and first ladies with huge age differences.

Julia, then 24, got married to Tyler who was 50-year-old. This caused a stir in the white house.

Grover aged 48 got married to Frances who was just 21 years then. He was the first sitting president to get married when he was in the white house.

Cleveland was 48 when he became the first sitting president to get married to 21-year-old Frances Folsom.

Former U.S President Donald Trump and Melania are married with a huge gap of 24 years. Melania is Trump third marriage after divorcing the first two.

James Madison was 43 years old, when he married 26-year-old Dolley Payne. The marriage was Dolleys second then after her first husband died.

John F. Kennedy was 36 year old when he got married to 24 year old Jacqueline. After his assassination in 1963, the former President was survived by Jackie and the couple's two children.

Ronald Reagan aged 41 back then got married to 30-year-old wife, Nancy. 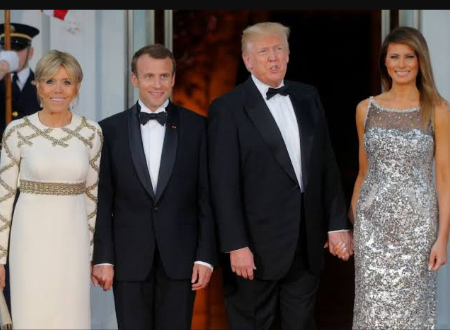 The above picture shows French President and his wife who is 25 years older than him coupled with the former US president who is 24 years old than his wife.

French President Emmanuel Macron Is 25 years younger than his wife.