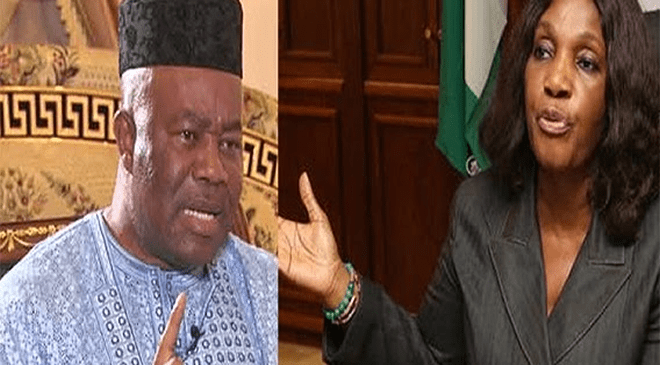 The Interim Managing Director of the National Center for Disease and Control, Joy Nuniueh has claimed she is the only woman to have ever slapped Senator God'swill Akpabio, who is the current Minister of Niger-Delta.

The woman in an interview with Arise TV earlier claimed, the former governor of Akwa Ibom state once forced her to take oath three times, so that he can embezzle some amount of money of which she declined the request.

However in an online interview with her this morning, she claimed Godswill Akpabio, who is president Muhammadu Buhari's current Minister of Niger-Delta once sexually assaulted in a meeting he called her to, of which the minister later received slap from her.

The Ogoni woman who claimed that, Godswill Akpabio doesn't know that Port Harcourt girls are not after money thought, he should carry out his plan B on her, since he could not force her to take the money.

She revealed it that he promised to make her a substantive Managing Director of a company, without him knowing those things doesn't move her, before he sexually assaulted her.