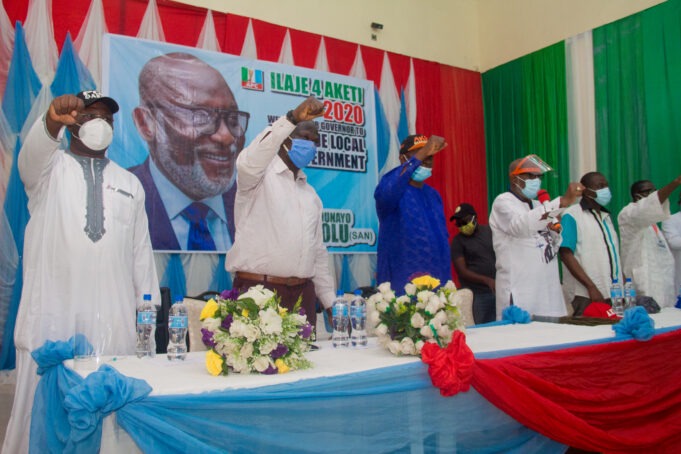 At the Governor’s ‘meet the Delegates’ tour of the local government on Saturday, July 18th, the APC members and delegates who received Governor Akeredolu with fanfare and excitement expressed their preference for the choice of Gov.

As their candidate, Akeredolu. Some of the delegates who spoke to the newsmen said that the governor of the state, Arakunrin Oluwarotimi Akeredolu, is a preferred choice, because he has shown himself to be a "talk and a governor." They said that the only way to consolidate on the steady course of this budding administration is to allow the governor, Akeredolu, another term, especially as he promised to give Ilaje Speaking at the Williams event center Igbokoda, the seat of the Governor / Delegates Parley, Ondo State Commissioner for the Environment, Chief Esan assured the Governor of the overwhelming vote of all 186 local government delegates.

Olabintan assured that Akeredolu 's administration would attract more beautiful development projects to the coastal communities of Ilaje in its second term.

Earlier, the governor and his team visited The Olugbo of Ugboland, His Imperial Highness, Oba Dr. Frederick Akinruntan at his palace in Ode Ugbo, where Oba Akinruntan had drummed a massive support for Akeredolu.

The Olugbo, who hosted Gov Akeredolu in his ancestral palace, congratulated the governor in advance on his victory at the APC primaries on Monday. Although assuring him that all the delegates from Ugbo, nay Ilaje, should support him with their votes, he assured the governor of his people of support beyond the primary APC.

Oba Akinruntan said, "I have told all the other contenders to go and relax their governorship ambitions for the time being and allow Gov. Akeredolu to complete his second term, which has been enshrined in the Constitution, and then we can talk about the turn of the South to produce the next governor."

For more details, visit below link