Why Iran and the United States Might Go To War

By Melissa_ (self meida writer) | 1 years

Following protests and attacks on the United States embassy in Iran, the president, Donald Trump in taking a proactive step ordered the deployment of about 100 troops to Iran and an air strike on the Baghdad International Airport killing top Iranian military commander, Qasem Soleimani, his assistant and some others. This has put further strain on the already fragile relationship between Tehran, Washington DC and US allies in the Middle East. The supreme leader of Iran, Ayatollah Ali Khamenei, has sworn revenge for Soleimani’s death saying:

The Iranian President, Hassan Rouhani, said the air strike was “a grave mistake...Americans would face the consequences of this criminal act not only today but also in coming years.”

Soleimani who was accused by The Pentagon for the death of hundreds of US soldiers, coalition forces, Iranian protesters and wounded thousands has been mourned for 3 days with the traditional red flag hoisted all over the country. This flag is ambiguous as it may be indicative of the death of a prominent figure or a declaration of war.

There have been rallies in the streets of Iran with people carrying pictures of the general and chanting “death to America...revenge, revenge, revenge” In light of these public statements and tensions, Donald Trump ordered the deployment of over 3000 more troops to the Middle East.

Trump, however, continues to reiterate that the US will not cower in the face of threats and warns Iran to desist. 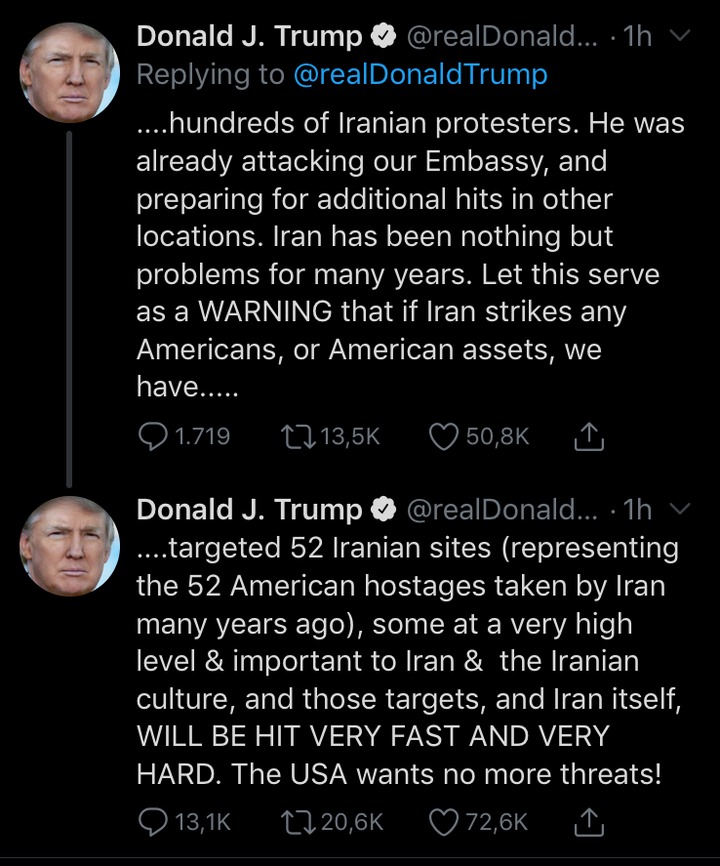 All this has sparked panic in the general public with many persons speculating a potential World War III with the ominous hashtag trending all over the media. The reactions have been mixed with some Americans saying, Trump was wrong for not convening before giving out the orders; it was a power grab (a US president at war cannot he unseated); a war is highly unlikely but an increase in terrorist attacks on US interests and/or personnel is likely. Some Twitter users from the Middle East have tweeted thanking Trump for the killing.

There have been several jokes on the internet as the public desperately try to soothe frayed nerves and anxiety.

Content created and supplied by: Melissa_ (via Opera News )